Female broadcasters an easy target for the anonymous keyboard warriors 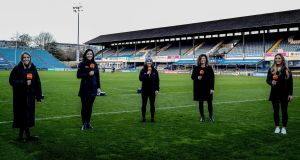 It was November 2020. TG4 had just announced a first all-female broadcast team for Leinster’s game against Cardiff in the Pro14.

Presenter Máire Treasa Ní Dhubhghaill would be joined by former and current Irish international players Deirbhile Níc a Bháird, Éimear Considine and Jenny Murphy for analysis, while Máire Ní Bhraonáin was the commentator. A new departure. All women in a man’s game. The story had legs.

“I thought feminism was about equality not dominance,” said another and “is it not sexist to remove men altogether,” yet another.

A few days later, Leinster Rugby’s communications manager Marcus Ó Buachalla posted a series of comments on his Twitter account. The announcement by TG4 for the rugby match had been made the previous Friday.

Twitter had cranked up over Saturday and Sunday, eager to take up the ball of the all-female broadcasting team and run with it. To some the TG4 decision had caused grave offence.

“Quite sad really the level of trolling and negativity encountered over the weekend on our channels,” said Ó Buachalla. “It’s not all Seamus1470642579 accounts either. Quite the puzzler why so many men feel so threatened and yet so emboldened to take to social media the way they do.”

It’s the story that’s been written a thousand times and each time it has been put to rest, it returns to life tatty and decayed, but no less virulent and hurtful. It cannot be killed.

Transformed from the original pomposity of old-stager misogyny into a contemporary carefree vileness for which social media provides anonymous channels, last week it was former England player and World Cup winner Maggie Alphonsi and ITV network colleague Danielle Waterman who were the targets.

A number of gender-aimed remarks by viewers online questioned why they were working on the men’s Six Nations Championship – as former Irish captain Fiona Coghlan does in Ireland with RTÉ. It was not original but banal, gag-driven, derivative abuse.

Another male card posted on Twitter. “Just to get in the spirit of modern feminism, I’d like to suggest the female co-commentator on the rugby pops off and put the kettle on for half-time.” Boom. Boom.

Another remarked: “It’s getting ridiculous all this box ticking, another channel with sound turned off, what does she know about men’s professional international rugby union?”

As an analyst for the network, Alphonsi, was capped 76 times for England and named on the 2014 World Cup Dream Team. She retired shortly after England won the 2014 World Cup in France, where Ireland finished fourth, and now continues to coach and promote female participation and coaching in sport.

She has played in two Rugby World Cups and in 2012 shared in a record seventh successive Six Nations title and a sixth Grand Slam in seven years.

It’s unlikely her credentials impressed the core base of objectors as reason doesn’t figure highly in debates with bigots. They tends to play out along the lines of where the largely male aggressor sees perceived weakness.

In the cast of TG4 some of the credentials were no more than women who were good at their job. There was no World Cup to back up claims. Then as Considine, Murphy and Alphonsi found out, for a woman a World Cup and over six dozen international caps is never quite enough.

“The TG4 approach has always been the súil eile approach and having women at the forefront of our broadcasting from having the first woman broadcaster to then having the whole team of women,” says Ní Dhubhghaill. “That was a landmark occasion for us. Having a full female commentary team was really big and we were really proud to be involved in it.

“It was mostly positive but Marcus had to come back and hit out at people that were asking why Leinster Rugby were supporting such a thing as having female broadcasters in what they were calling a male-dominated sport. It wasn’t personally at me. It was more ‘why are these females doing what they are doing’.

“One email came in when Máire Ní Bhraonáin was commentating on our rugby. It said that it was an absolute disgrace. It said ‘why am I subjected to listening to a female voice commentate on a male sport’.”

For the English flanker the received trolling did not happen in a vacuum. One of her colleagues was also targeted when she went to Coventry to work on rugby. Women involved in covering the football beat regularly receive zealously abusive messages from fans replete with all of the gender specific tropes and slurs.

In Alphonsi’s mind there was a decision to make. She could stand up to it, pretend it wasn’t there in which case it could become the norm, or she could take it to heart, be damaged by it and fall into victimhood. She decided on confrontation.

“It’s got to the point where you just can’t keep tolerating it otherwise it becomes acceptable,” she says. “So I felt I’m going to make a response, not communicate with the trolls themselves but to point out this happens.

“Regardless of who you are a certain amount of negativity does have an impact. I try to reframe my mindset. I try not to treat it like I’m a victim. There are small-minded individuals out there who make these comments and I feel if I let their comments in too much, it gets to a point where I am the victim.

“I try to turn it around to say actually I am going to control this scenario. I’m going to make a stand on this with the hope that many others who are experiencing the same that they follow as well so that it becomes a momentum.”

Ireland’s most capped player, Lynne Cantwell, played against Alphonsi for many years in the Six Nations championship and became friendly with her after both had stopped playing. On the board of Sport Ireland, the physiotherapist has also had stints on television as a rugby pundit.

She says Alphonsi is not naturally a very public person, has integrity and is a deep thinker. Her prism is that of a black woman involved in a sporting world created by men and fundamentally populated by men. Cantwell has not been explicitly trolled but was aware of the TG4 cast as well as her former England opponent.

“You do get affected by it,” says Alphonsi. “If it is happening over and over again. Some people say why don’t you just get off Twitter. That is a solution but it’s still happening. The reality is social media is out there why should I have to change my life.

“It’s been disappointing recently because obviously Ian Wright took a case [in Tralee District Court] against a troll who gave him racist abuse. That went to court. Sometimes people in the public eye go through that challenge. They almost get put off by doing anything or wanting to campaign.

“You get to the point where you keep standing up and shouting out about it and nothing gets done. You lose faith a little bit. I do think there could be harsher punishment or more control from social media. A lot of people I tried to report but nothing has come back from that so...”

Women’s place in the sporting landscape is an ever-recurring question, which directly reaches to the dogmatists and segregationists who patrol social media. Recently Olympic Federation of Ireland (OFI) general secretary Sarah O’Shea conducted a survey among board members in Irish sport.

She found that 29 per cent are female, 24 per cent of CEOs are female and 12 percent of chairpersons are female.

In rugby the IRFU currently have a 26-person committee. Just two, Su Carty and Mary Quinn, are women. Quinn was the first woman elected to the committee in 2015. The Rugby Football Union, headquartered at Twickenham, has a 14-person board of directors at the top of the organisation. Four, Paula Carter, Sue Day, Genevieve Shore and Helen Weir are women.

Last summer the BBC conducted a survey of elite sportswomen with 30 per cent saying they suffered social media trolling and “relentless” online bullying. The percentage had doubled in five years. Similarly almost 27 per cent of comments on Facebook posts by leading Australian broadcasters were negative towards sportswomen versus eight per cent for sportsmen.

“I pretty much made my point, put my thoughts out there,” says Alphonsi. “I’m not the victim. I put a stand out there and I’m very much focussing in moving on, focussing on my next job which is this weekend. It’s the same when I was a player.

“People think that you had a bad performance and the only way to silence those critics is to get out again and put in a good performance. That’s my attitude now. They were in the wrong, not myself. My job is to not let what those small-minded individuals have to say affect who I am. Because I have not changed.”

Leinster Rugby’s Ó Buachalla remembers it was six years ago he had to block the first account on the team platforms because it was such a major thing to have to do. Now, racist, misogynist and other abuse has changed that landscape.

Little can be done as long as the unidentifiable exist, while some newspapers have stopped comment sections altogether. One thing remains constant. Women get it more than men. And they get it wholly because they are women.

“These people who are tweeting. It’s more a question about them than about people [women] doing a job. They need to be educated,” says Coghlan.