Clerc thinks Ireland lack star power, by the numbers, quote of the day and more 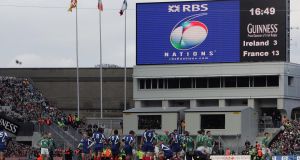 Ireland came back to win in the famous game against France in 2007 at Croke Park. Photo: Morgan Treacy/Inpho

Last Wednesday, February 10th, marked the 13th anniversary of the first rugby match to be played in Croke Park. Ireland hosted France on a momentous occasion - the Sligo motion to amend Rule 42 at the 2006 GAA Congress required a tow thirds majority and was passed by 227 votes to 97 - that permitted the national rugby and soccer teams to play matches at the iconic venue while Lansdowne Road was being redeveloped.

Ireland captain Brian O’Driscoll was injured so the Eddie O’Sullivan coached team was led onto the Croke Park turf by Paul O’Connell. France led 13-11 at half-time through a try by hooker Raphael Ibanez and two penalties and a conversion from David Skrela. The home side’s response was down to Ronan O’Gara’s try and two penalties.

The Irish outhalf tagged on two further penalties to nudge his side 17-13 ahead but there was to heartbreak in the dying minutes when French wing Vincent Clerc slicing through the defence for a try which Lionel Beauxis improved upon. There are several links remaining from that day to next Sunday’s encounter.

Paul O’Connell and Simon Easterby, who played in 2007, are part of the Irish coaching team while Ibanez is the manager of the current French team and the coach from 13 years ago, Bernard Laporte, is the president of the French Rugby Federation.

6: The number of victories that Ireland have enjoyed against France in the last eight tournament meetings between the countries that includes their World Cup pool match at the Millennium stadium in 2015. The French last won in Dublin in 2011.

“I know what he (Antoine Dupont) can do. He is a world-class player. He is one of those players that you have to be very, very aware of, especially around the ruck. But then you see him running those support lines and you have to be very aware of him away from the ball as well.” Ireland flanker Josh van der Flier talking about the threat posed by the French scrumhalf.

Villiere happy at the breakdown

The 25-year-old French wing Gabin Villiere may be in the foothills of his international career with just three caps but he has already shown that despite his diminutive size relatively speaking, he is very effective when it comes to both carrying ball and making his presence felt at the breakdown.

He has drawn from his days as a Sevens international where all players are expected to be able to contest the breakdown. It’s an area of the game with which he is comfortable. “I have a lot of fun in the dark spots. It’s one of the little things that I like to do, that I like to bring to the collective. When the wingers have less attacking balls, we have to find other sectors where we can be useful to the team. “

February 12th, 2005: It was a Six Nations afternoon at Murrayfield that didn’t start well for Ireland but proved worse for Scotland as the home side collapsed to a 40-13 defeat. The Scots jumped into an 8-0 lead after nine minutes but thereafter it was the visitors that excelled.

Tries from Malcolm O’Kelly and his secondrow partner and Ireland captain, Paul O’Connell got Ireland going and by half-time they had taken the lead. Denis Hickie and Gavin Duffy crossed the Scottish line after the resumption and there was also something of collector’s item in terms of tries when John Hayes touched down; it was one of two in 105 caps.

Scotland captain Gordon Bulloch apologised for his team’s performance in the aftermath: “We committed rugby suicide out there. The fans came full of expectation and we let them and ourselves down badly. For that, we are sorry. Words can’t really describe how the guys feel because we know our mistakes cost us.”

The former Toulouse wing Vincent Clerc knew a thing or two about scoring tries for France against Ireland in his international career, eight in 11 matches all told. Now a television analyst, he offered the following assessment in the Midi Olympique newspaper ahead of Sunday’s game.

“(France needs to play with) a lot of commitment and a lot of precision more than in the other matches. This Irish (team) does not really have breathtaking players, who make huge differences like we find in Scotland or in England. But they’re very good at the basics of the game.

“They don’t like disorganised play but are always thorough and precise in everything they do. If they manage to follow their pattern without (us) being able to counter them, they become formidable. But when we manage to counter them on their strengths, they no longer have a solution.”