Noise around Johnny Sexton only muddies the concussion waters further

Johnny Watterson: Medics have player’s best interests at heart but all have a different view 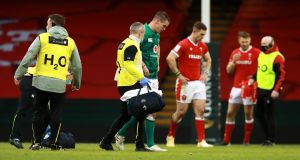 Concussion did not have its best week ever defining itself to the great unwashed. Dr Barry O’Driscoll fearlessly stepped forward to again assert that the return to play protocols, which Johnny Sexton is currently undergoing, are a construct with no scientific basis.

World Rugby might disagree but Dr O’Driscoll believes they are not modelled on previous medical investigations. There are no papers showing six days is enough time to expedite a head injury. The protocols are designed to assist and accelerate players’ return to the field of play. As Dr O’Driscoll explained: it’s commercial, stupid.

That came after the confusing part of the week, when Dr Jean-François Chermann, a neurologist who stood down Sexton for 12 weeks during the time he was playing with Racing in 2014, re-entered the orbit of his former patient. He waded in with what appeared to be a spasm of unguarded honesty combined with what Sexton himself believed to be a breach of doctor patient confidentiality.

“I think Johnny Sexton has had around 30 concussions across his entire career. It’s true that it’s enormous,” Dr Chermann among other things, claimed on French radio. He later retracted what he said.

The problem is, he can’t unsay his spoken words and people are left to believe either his first statement or his later retraction. They are asked to question why a specialist would say such a thing unless he believed in its veracity, all to the backdrop of a perplexed Sexton categorically stating its lack of veracity.

Now everyone is again flapping around the room with their hair on fire. It is not hard to see why. French neurosurgeon, Dr Jean Chazal, also popped up. What a week. He also decided to make a contribution, again unsolicited by Sexton.

“He leaves the field with difficulty, with his legs spread which is another sign of ataxia. So, something happened neurologically. It’s undeniable,” Dr Chazal told French online platform Rugby Rama. The presumption is he watched Ireland’s match against Wales on television and did not examine Sexton.

“If Sexton plays on Sunday, it’s sad for him. This is what really inspires me: sadness,” added Dr Chazal.

Sexton said he has been here before and sees it all as lose, lose for him, his concerned mother and his upset wife. It’s easy to understand the disappointment and frustration at his rugby having a negative knock-on effect to his wider family.

Referring to Dr Chermann’s comments, Sexton also spoke about how improper it was that a doctor “I have seen many years ago now felt it was appropriate to come out and say those things”.

According to the Irish Medical Organisation: “The safeguarding of patient confidentiality is a fundamental principle of medical ethics which dates back to the Hippocratic Oath. Confidentiality is both a patient’s right and a doctor’s duty.”

What the French doctors said before retraction also challenges how the medical staff in Leinster and Ireland have been dealing with the issue. People listen to and read their words and instinctively accept their accuracy and expertise. By being French they have some skin in the game as Ireland play France on Sunday but less so than Irish doctors working from inside the Irish team.

There is an irony there. Almost every rugby player who talks about injury in Ireland, every player who answers questions about a hamstring, or knee or ankle or cheek fracture or concussion, never fails to acknowledge the professionalism and care of the medical staff. Sexton reiterated that point on Wednesday.

“I trust the medical guys here. They look after us incredibly well,” he said.

But no less so because Sexton is talking about it again, it is bewildering and disconcerting. There is no question that all the doctors have the care of Sexton at heart. Dr O’Driscoll does, the French doctors do and the Irish team medical staff do. But they are expressing that concern in different ways, some with bald candour that we are unused to hearing, others with hushed professionalism. More importantly, what to do next is not in agreement.

Sexton hopes to play against France seven days after the head injury. In comparison a less respected cousin, Olympic boxing, rules that if a boxer suffers a knockout as a result of a blow to the head or if the bout is stopped by the referee, the boxer may not take part in boxing or sparring for at least 30 days. Being stopped by the referee in boxing is equivalent to being taken from the pitch in rugby to undergo a HIA.

From the outside looking in rugby, like boxing, is not risk-averse and the participants understand that. While the danger is measured and not reckless, the point of safety is clearly in dispute. To hear doctors express such unfiltered views is eye opening, while it continues to add to Sexton’s distress and wider confusion.

As Dr O’Driscoll explained, there is no test available for anxiety, depression or dementia from CTE that may only become known in 10 or 20 years’ time. That’s the nub of the matter. That and the agreed conceit of return to play protocols.