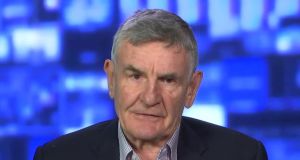 Dr Barry O’Driscoll believes the present concussion protocols in rugby union are there for commercial reasons.

“It has got worse since I resigned,” says Dr Barry O’Driscoll, the former medical adviser to World Rugby who stepped down in 2012 to protest against the governing body’s concussion protocols, namely the head injury assessment (HIA) and current six-day return to play protocols.

O’Driscoll believes the current system that allows a concussed professional player to return within a week as “so obviously done for commercial reasons”.

“In the nine years since I left World Rugby we have become more relaxed about sending players with brain injuries back to the field, when the game has become more threatening, and the players are bigger, heavier and the knocks are huge,” he told the Irish Times on Wednesday.

“The HIA and return to play protocols have no scientific standing. The six-day return to play came in because the game went professional and there was pressure to get a player back for the next game. It was based on nothing else.

“There is no way of doing a test to see who will get multiple sclerosis, epilepsy, anxiety, depression or dementia from CTE. We do not know. But we do know we are abusing these young men.”

O’Driscoll was a key figure in World Rugby’s concussion strategy until the former Ireland international stepped down after a five-minute, pitchside HIA was trialled at the 2012 Junior World Cup in South Africa.

“That was just madness. People must realise that we knew, at that stage, that the adolescent brain was more vulnerable. We knew they would get worse trouble from it in later life, yet we picked them to have a five-minute pitchside assessment.

“I resigned after that. They changed it to 10, 15 minutes but it makes no difference. Sometimes the acute symptoms of brain injury don’t show up for 12, 24, 36 hours so how can you say after 10 minutes the brain is not injured?”

The six-day recovery process has come back into focus following Sunday’s encounter between Wales and Ireland in Cardiff, when five players underwent HIAs. The two Welsh concussions are automatically ruled out of their match in Edinburgh but the Irish players – James Ryan, Johnny Sexton and Robbie Henshaw (who passed his assessment), have the opportunity to play against France on Sunday as there is a seven-day turnaround.

A concussed rugby player used to be stood down for a mandatory three weeks.

“That was decided in 1977 at a medical conference in Dublin,” says O’Driscoll, who lives in Cheshire, and comes from one of the most famous Irish rugby families. The 77-year-old won four caps for Ireland in 1971 and his younger brother, John, was capped six times for the British and Irish Lions at wing forward, while they are cousins with Dr Frank O’Driscoll, the father of Brian.

“The law cases will pour out over the next few years. There are already class action lawsuits in the UK and New Zealand over concussions and still it has made no difference to what they are doing.

“We lowered the tackle and I think that is great – you see what happened to Peter O’Mahony against Wales, but he is very lucky to get only three weeks [matches]. The shoulder to head has to be taken out of the game. The only way to do that is a longer suspension.

“There has to be a couple of other changes brought in as well.”

O’Driscoll would start by moving the offside line back 10 metres, an “absolute minimum” of two weeks for return to play protocols and the adoption of Rugby League’s 40-20 rule, which gives a team the lineout for a kick inside their own 40-metre line that bounces into touch in the opposition 22.

“The 40-20 rule won’t go down well at Twickenham but it promotes the skill element of the game and it forces the defence to take at least one player out of the defensive line. The current offside line is leading to huge trauma at every single play. It also makes the game less attractive.

“We want to make space for runners like cousin Brian to come through again. I would do away with the HIA or at least take the decision out of the team doctor’s hands. Or anyone to do with that club or the other side.

“We know from every walk of life that the doctor is subconsciously pressurised to come down with their side. And the player will lie.

“The doctors are compromised. Subconsciously. We need a completely independent doctor, only in every professional game because we are never going to bring this Head Injury Assessment into the amateur or schools rugby, are we?

“In medicine – and this does not reflect on any individual doctor – once the material value becomes the really important thing rather than principles, the relative values become flexible.

“Rugby is a great game,” O’Driscoll adds, “but we are going to have to make changes that do not destroy it as a sport. And every player has got to be told exactly what the possibilities and problems are. The NFL got done for $720 million for hiding facts from the players and we, as far as I can see, are not giving the full information to the players.”

3 Show me the medals: Ireland drops one place in Tokyo Olympic predictions