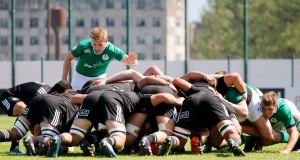 Ireland’s Jonny Stewart watches the scrum in their defeat to New Zealand during their World Rugby U20 Championship Pool B clash. Photo: Archil Gegenava/Inpho

The anticipated mismatch materialised in what was a painful afternoon for a young Ireland side at the Junior World Championships in Kutaisi as New Zealand emphatically avenged last season’s defeat – the Irish team went on to reach the final – and in the process helped themselves to 11 tries and a place in the semi-finals of the tournament.

The Irish Under-20s, who travelled to Georgia without a host of frontline players, suffered further injuries in a one-point defeat to Italy in their opening pool match and yet more in a four-point loss to Scotland.

That disconcerting trend continued as captain, Jack Kelly, was forced to limp off with an ankle injury, as did outhalf Conor Fitzgerald, who arrived just this week as a replacement. It would be a surprise if either players featured in Ireland’s next match where they will look to avoid the prospect of relegation from the elite tournament.

Peter Malone’s side will now compete for the ninth to 12th places in the tournament starting next Tuesday. If they were to lose that game, then they would face a straight shootout in their final match the following Sunday, to preserve their status among the elite countries.

Malone vowed to give everyone in the squad an opportunity and honoured that commitment for this game, while also acknowledging that several first-choice players needed a rest, with a view to being competitive in the matches next week.

The Irish side was appreciably overmatched as New Zealand’s gorgeous offloading and strong running allowed them to record 11 tries with a couple of hat-tricks for wing Caleb Clarke, a son of former All Black, Eroni, and fullback Will Jordan.

New Zealand scored their tries in staccato bursts but even when the outcome had long since ceased to be a debate, their rucking and tackling carried a bite that suggested last year had not been forgotten, something reinforced in a charmless post-match interview with captain Luke Jacobsen.

Even when New Zealand were down to 13 men, with two players in the sin bin, Ireland could not capitalise; the integrity of their effort could not be faulted but they lost a little shape in their desperation.

New Zealand are a superb side that may go on to win the tournament – England should provide their main rivals for the title. The consolation for Ireland is that getting that priceless win in their final two matches should be more attainable; injuries permitting.