Familiar faces give Lions a strong spine against Blues 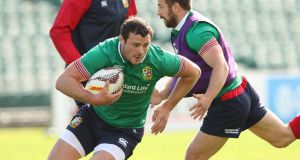 On TV: Live on Sky Sports

The Lions’ less than compelling opening tour win over the Provincial Barbarians in Whangarei has upped the ante in advance of their run-in with the Blues, their first against one of New Zealand’s five franchises. Auckland’s finest may seemingly be the weakest link of the quintet, but then these things are relative.

Critical to the Lions’ performance will be the spine of the team, where Warren Gatland and co have sought to provide some familiarity and stability around the English secondrow partnership of Maro Itoje and Courtney Lawes, the Ospreys/Welsh halfback axis of Rhys Webb and Dan Biggar, and the Irish midfield pairing of Robbie Henshaw and Jared Payne.

This has been Joe Schmidt’s centre partnership of choice since the retirement of Brian O’Driscoll; Henshaw and Payne being paired together for the latter’s debut in November 2014 against South Africa at the Aviva Stadium.

“Similarly we have the Welsh nine and 10 with Rhys and Dan, and myself and Jared know each other inside out, and I think that’s definitely a positive coming into the game tomorrow. I’m just looking forward to getting out there. It’s been a while since we played together, but I think we trained well during the week and it’s all positive, and I’m really looking forward to it.”

As Ian Madigan once ventured, one of Brian O’Driscoll’s greatest achievements was to have lasted so long in the warzone that is Test rugby in midfield. Yet such is the attrition rate of modern-day Test midfields that, in actual fact, since being ever-presents in the Six Nations triumph of 2015, Henshaw and Payne have only renewed their midfield partnership on seven occasions.

Payne missed all but the finale of the Six Nations against England, which was only his fifth start since suffering a lacerated kidney in the November win over Australia (Henshaw having been concussed a week before against the All Blacks).

However, thanks to the recurring calf problem which forced him to pull out of last week’s tour opener in Whangarei, Payne will this evening be playing his first match since Ulster’s draw at home to Cardiff on April 7th.

Set to oppose Henshaw in the Blues’ number 12 jersey, and thus for the first time ever, is Sonny Bill Williams, and Henshaw doubts he’s ever seen a more talented player.

“I was a big fan of his when I was a kid. Whether it was performing in league or for the All Blacks, I suppose to be coming up against him is pretty surreal. I’m looking forward to playing against him and having a go.

“If he’s a one-out runner and there’s no-one with him, obviously I’ll look to come in and make a double hit on him and try and stop his offload threat, but you have to obviously look at the guys who are flooding through as well.

“Often as a part of defence you have to go a double-man tackle on him, one high and one low, and try and stop the offloads around it. It’s definitely going to be a tough challenge but I think we have the right men in place to execute a good defensive system tomorrow.”

Nor will Henshaw have a dilemma about exchanging jerseys thanks - as with most test sides nowadays - to the Lions’ largesse.

“I think we get two jerseys, so I’ll keep one and swap one. It’s definitely one to keep. It’s a massive honour. I just want to wear it with pride, to go out there and do what I usually do.

“It’s obviously the top, top level of the sport for us and to be in this position is unbelievable. I just want to go out there and do myself proud, do my family proud and do the best that I can.”