Dave Ellis singing the Blues after golden spell at Connacht 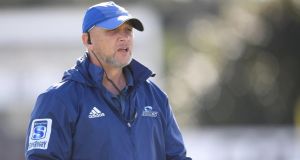 As ever, Dave Ellis cuts a slightly diminutive and low-key, if mischievous, figure amongst the comparative monsters in the Blues’ playing squad. If you didn’t seek him out you’d almost miss him altogether, the little former scrumhalf with the peaked cap almost hiding his grizzled features until the ready smile gives him away.

A key part of Connacht’s remarkable rise to Guinness Pro12 champions as the province’s skills coach for three and a half seasons up until last December, Ellis is now fulfilling the same role with Tana Umaga. But Connacht will forever be embedded in him, and he has the tattoo on the back of his right calf to prove it.

“Yeah, yeah. It always will be. Oh, I loved it. The more I look back on it, the more little memories come back. Things you take for granted. It’s really nice, just walking down those cobbled streets in Shop St in Galway a few times, you know?

“It’s probably the highlight of my career. Just a good bunch of guys, and a great occasion. I love that backs against the wall, against the odds stuff - it’s wonderful. I was there for three and a half years, I left because of this. I spoke to Pat about it before I confirmed this and I said an opportunity like this doesn’t come along too often, so if I don’t take it now it might not come around again.”

Connacht was his first job as a coach with a professional team, in a wandering life defined by rugby. As he admitted with a knowing smile a year ago while still with Connacht: “I wandered yeah. Maybe my wandering days might be over though. But I can’t complain about my life.”

Playing and coaching have taken him to Australia, Canada, the USA, Asia, South Africa, Hong Kong, Argentina, Connacht and now back in New Zealand with the Blues.

He comes from a small town called Putaruru, in Waikato, about an hour and a half south of Hamilton. “It’s inland, bushman country. It’s pig-hunting, loggers, timber mills and farming.”

Ellis was the youngest of six to his father Eric, a railway worker, and mum Margaret, or ‘Jean’ - and by some distance. “I was a mistake,” he cheerily reveals. “Rumour is that when my mother got the phone call she said: ‘Doctor, you must be wrong?’ That was me. We don’t know how Dad did it.”

The family home initially was a house in the railway yards. He describes his childhood as “wonderful,” adding: “My parents were old school. We had no money. Dad was the income, and mum did work outside the home as well when she could. We lived in town ‘til I was about 12. Then we moved into the country and it was great.”

The west of Ireland reminded him what his early life was like. As with so many boys in New Zealand, playing rugby was a rite of passage. He began playing, he reckons, when three-years-old and weighing three stone. He shone at school, if only at rugby.

After leaving Putaruru High School, Ellis played with Waikato age-grade sides until their under-21s, then senior rugby for the Putaruru club in the Waikato first division before an ankle injury in 1980 at the age of 22 stymied his career.

You can’t leave people who do that for you. It was a humbling experience

Ellis responded to an advertisement in Rugby News to join a club in the Sydney second division called Smithfield. In his eighth game there broke his tibia and severely damaged his cruciate and anterior ligaments. A surgeon said I couldn’t walk again. I asked him: ‘How can I live and not play rugby? You’ve got to help me play again’.”

So the surgeon made a special cast with a hinge for him, which the club paid for as well as having weekly whip arounds to give him food and beer money. “That’s why I stayed for two more years. You can’t leave people who do that for you. It was a humbling experience.”

There was interest from Dave Brockhoff, then the Wallabies coach, and Ellis explored a move to Queensland, but instead opted to explore Australia with his then girlfriend, and settled in the heart of the Great Barrier Reef, driving a laundry truck.

He discovered he missed rugby, and when a mate rang him imploring him to come to Darwin and play rugby, he joined the South Darwin club. In 1985 he and some equally disgruntled teammates formed their own club in tandem with the university there, calling themselves the Pirates, and Ellis became their player-coach.

In their first year, the Pirates reached the semi-finals, and then won three Darwin Premiership titles in a row from 1986. By the time Ellis moved on after eight years, the Pirates had teams at grades A, B and C, as well as a women’s team, which he coached, and under-18s, 16, 14s teams all the way down to what he calls ‘the little Tuckers’, or under-8s.

He played in Darwin’s summer, their wet season, and in their off-season travelled to play elsewhere - be it Sydney, the USA or Canada, and reckons he was never more than six months in any one place for about eight years. In Canada he played for a club called Cowichan in Vancouver Island. There was also a stint playing Sevens rugby in Singapore.

All the while, odd jobs supplemented his modest rugby income. “At the university I drove the courier van. I built swimming pools in Darwin, laid hardwood floors in Canada, cut trees down in America, logged through the bloody Rockies.”

Devising skills drills on his computer prompted him to create his own company, Digirugby, with a friend to promote and sell his drills on CDs. While promoting his product, Ellis bumped into Murray Mexted, who invited him to coach with his IRANZ (International Rugby Academy New Zealand). The NZRU contracted Ellis and provided him with the funding and equipment to devise a computer skills programme for the NZRU, in tandem with coaching at IRANZ.

That was his longest stint in one job or place - 10 years. All manner of All Blacks and players from abroad went through IRANZ, as did coaches, which led to a fateful chat over lunch with Pat Lam and Ellis pitching up in Connacht.

Also along the way Ellis fathered a daughter Ashlee, through his then girlfriend Lisa, and two boys, Cory and Brody, with his first wife Cathy. He married his second wife, Esther, after his first season in Connacht.

After well over three decades of a distinctly nomadic playing and coaching career, so Ellis has taken up the same role of skills coach with the Blues, his second job with a professional team.

“It probably came off the back of Connacht to be fair. I’ll be forever thankful of that.”

In a sense the debt Connacht owe to their one-time skills coach is immense, so it works the other way.

The Blues have had a frustrating season.

Beating the Lions would be a huge feather in his and the Blues’ cap.

“I get a bit disappointed when I hear people disrepecting them, because I know how hard those boys work and how much potential they really have.

“It must be hard for the coaches really, you get all of these boys from all over the place who are mortal foes and you try and place them in one team in a short space of time.

“I have massive respect for European rugby, I must admit I was possibly a little naive and didn’t have that respect before I went over there and saw how hard the boys worked (in Connacht).”