Ring-rusty Lions hope to start with a statement victory 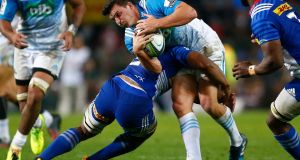 Bryn Gatland will face his father’s side when he lines out for the New Zealand Provincial Barbarian against the Lions. Photograph: Nic Bothma/EPA 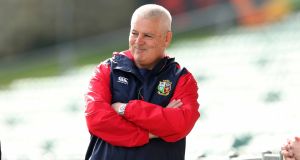 While head coach Warren Gatland has repeatedly stated that losing non-Test matches would not constitute the end of the world, losing this one is non-negotiable. Photograph: Billy Stickland/Inpho

On TV: Live on Sky Sports 1

An opening selection featuring the captains of Ireland, Wales, Scotland and the Lions, along with other luminaries such as Johnny Sexton, came about more by accident than design. It was as much due to these players’ rustiness and need for games. But it’s also served to up the ante when the Lions make a relatively low-key start to their ten-match tour in New Zealand’s northernmost city of Whangarei on Saturday.

Put another way, anything less than a fairly convincing win could heap pressure onto the tourists, rather than generate the kind of mood music required to set a positive tone from the outset. This is all the truer as it can only become tougher hereafter.

So while this fixture may ultimately be no more than a postscript to the tour, and head coach Warren Gatland has repeatedly stated that losing non-Test matches would not constitute the end of the world, losing this one is non-negotiable.

“The statement, first of all is a win. In 2009 we struggled in that first game,” said Gatland, in reference to the 37-25 win over a composite provincial side, aka the Royal XV. “It will be hard on these players and the weather will play a part. We will go out there and give a good performance.”

“They [the Barbarians] will be hugely up for it and have half a dozen players who are involved in Super Rugby squads. A large proportion of them are coming out of club rugby so probably haven’t played at a high intensity for a few months so we have to play with tempo and put them under pressure.”

“It’s about us concentrating on ourselves and setting down a marker for us to build on for Wednesday [against the Blues] and through to the Crusaders. It is an important week, this first one. To get off to a good start I want the players to put us coaches under pressure and make the job difficult for us in terms of selection when it comes to the first Test.”

There is one change to the team announced on Wednesday with Jared Payne ruled out with a calf strain. England’s Eliot Daly comes in on the bench.

The Provincial Barbarians are themselves a composite side, made up mostly of fourth tier players. Some have been in Super training squads, but few have seen game time. Most would have been playing club rugby last weekend, or the weekend before, in front of modest crowds, compared to the near 30,000 here.

Lachlan Boshier did help the Chiefs beat Wales last year, while Jack Stratton’s grandfather and father both played against the Lions for Wanganui province. Luteru Laulala is the youngest brother of former Munster centre Casey. Reserve backrower Peter Rowe, a sheep farmer and stalwart for Wanganui in the provincial second tier, actually retired last year. Veteran inside centre Dwayne Sweeny was coached by Gatland in Waikato a decade ago.

Of course the Barbarians’ outhalf is Gatland’s 22-year-old son, Bryn, who plays with North Harbour and has made four appearances for the Blues this season. Gatland snr has played down the potential emotion of the day.

“The Farrells have been through exactly the same situation. We’ve had a chat about that and a bit of banter. I’ll catch up with Bryn tomorrow.

“Nah, it’s not an emotional occasion. I have joked with him that we both would have played against the Lions and it’s unfortunate that only one of us would have won.” Pausing and laughing, Gatland added: “I desperately hope that is the case.”

Opposing him will be Johnny Sexton. “He’s been great,” said Gatland. “He knows he needs to get some games under his belt. He knows that the competition is pretty fierce in that position, but he’s a competitor and that’s what has made him one of the best 10s in world rugby. I’ve got no doubt he’d want a good performance from himself on Saturday.”

“His first concern I think was who’s going to do the goal-kicking, because Greig [Laidlaw] is obviously a quality goal kicker as well. But Neil Jenkins told him he is. He is confident and happy enough with that decision. He needs to go out there and hopefully perform well.”

Fervently believing his own squad is sprinkled with pace, footwork and X factor, and noting how the All Blacks often win games thanks to brilliant moments of individualism, Gatland said: “As coaches we have to give them the freedom to go out there and play what is in front of them and be able to express themselves.”

“I said to the players this morning: ‘If we’ve got a four-on-two on our goal-line, then the decision to me is that you’ve got to move the ball and do something. I don’t want you to play by numbers. I want you to play what is in front of you.’ I want them to express themselves, starting straight away, in this game. You have to give them that confidence that they can go and do that and maybe create something special.”

The forecast rain is expected to abate well before kick-off, and with this team’s ball-carrying ballast, the pace and finishing ability of the outside backs and some impact off the bench, there should be tries in them.

Yet, this most winnable match of the tour is also its one true banana skin against opponents for whom, probably to a man, this represents the chance of a lifetime.

Furthermore, while this Lions’ match-day 23 were all in camp last week at Carton House, new combinations abound, their preparation time is negligible, they’ve barely set foot in New Zealand, and the vast majority are ring rusty.

Bearing all that in mind then, the Lions may do well to cover the handicap, or even to be perfect at set-piece time, much less at the breakdown and in their link play, thus sustaining a clear supremacy over 80 minutes. A somewhat scratchy if ultimately clear win is thus the likeliest outcome.

Forecast: Lions to lay down a strong marker.