CJ Stander feels ‘like a kid again’ ahead of Lions debut 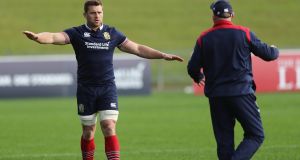 CJ Stander is set to make his Lions debut against the Blues on Wednesday. Photograph: David Roger/Getty

CJ Stander is a Lion, and the thought of being one makes him feel “like a kid again.” For a South African who supported the Springboks against the Lions in 2009, and who arrived here via Munster and Ireland, it’s been an unlikely and circuitous journey.

“Just to be part of a squad based out of those four nations it means that you worked hard to get there. Your job is not done yet, but you’re part of it.

“I think we’re a group that has a lot of talent, and a lot of guys who have X factor, so I’m looking forward to playing alongside that and just getting to know the lads. I put it down to the passion the boys have for the jersey and the excitement everyone has when they get selected.

“It’s like I feel like a kid again. When you get selected for that first team you can almost believe that you’re there, so I’m really looking forward to going out on Wednesday.”

Stander was 19 when he first saw the Lions in the flesh, and was supporting the opposition. “I watched a live game in South Africa (second test) in Pretoria in ‘09. It was quite special. I just remember the boys coming out and putting in some shift. I think they were unlucky at the end. But yeah, that’s my first live memory anyway.”

However, as someone who played for the Bulls, Stander will bring a degree of fearlessness and physical aggression against the All Blacks which is typical of a South African.

“Yeah, they’re a good team,” Stander says of the Blues. “I think they’ve eight All Blacks in, they’re a great team. I’ve played against them, a few more years back, and I’ll know some of the stuff they’ll do.

So far, Stander has been soaking it up like a sponge. Last Friday, he travelled from Auckland to Whangarei in one of the fleet of sponsored Landrovers with Dan Cole and Jonathan Davies.

Jared Payne’s journey to here has completed even more of a circle. Payne is a Kiwi who was effectively released by Warren Gatland at Waikato, but having revived his career with Northland, came through the Chiefs, Crusaders and finally the Blues themselves before moving to Ulster in 2011.

Payne’s first season was written off with a knee injury, and back then it would have stretched credibility to think he’d have ended up back here as a Lion. It was put to Payne yesterday that, conceivably, he could have been running out for the Blues this week.

“Yeah, every now and then you think about it. At the time when it first happened and hurting myself when I first got to Ireland it might have seemed like a bad thing, but now I wouldn’t change anything. I’ve set up a life over there. I’ve got a partner and a baby, and I wouldn’t change it for the world really. It’s been a great ride and hopefully it continues.

“I don’t really get caught up in the what ifs. As I say I’m over the moon with what I’ve done. It’s been a pretty awesome ride so I don’t really get too worried about what I missed out on. I’m pretty happy with where I am.”

The abuse is almost pantomime level, and Payne knows better than anyone what to expect.

“My mates will probably be the worst out of any of them to be honest,” he says cheerily. “They’re an unforgiving bunch and they’d love to see me get smashed by someone probably. It’d make their day. I’d imagine I’d get a bit, but it’s all good fun.”

Payne hasn’t played a game since April 7th, when he limped out of Ulster’s game against Cardiff.

“Just old age. Getting a bit old and slow. It was just a tight calf and it was decided not to risk it.”

“I didn’t grow up in the Blues region, I grew up all over the shop but Eden Park is a fortress for New Zealand rugby. It’s pretty obvious the mantra it holds and the Blues boys in front of a packed Eden Park is going to take it to another level because they don’t get that too much there. It’s going to add a real buzz to them and something we have to get up for.”

Asked if he was the go-to man for insider information on Auckland and New Zealand, Payne laughed aloud and said: “No. I am the go to man to get the piss taken of me, the way the Kiwis talk and everything, a lot of boys are getting stuck into me. It’s all good light-hearted fun. It’s fun, nothing too serious.”

Nothing of any concern found in inspection of Gordon Elliott’s stables 19:16
Reanne Evans and Ng On-yee offered professional tour cards 18:36
Leinster and Munster homing in on French opposition in Champions Cup draw 18:11
New Champions League format could see 36 teams in group stages 19:40
Sam Bennett has to settle for fifth in second stage of Paris-Nice 16:40
Crossword Get access to over 6,000 interactive crosswords