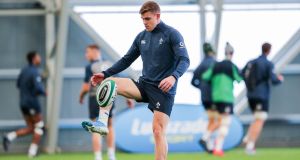 At a time when there is little or no actual sporting news going around and certainly very little of the positive sense, Gerry Thornley writes this morning that there is a shaft of light amid the glooming as Garry Ringrose is believed to have signed a two-year central contract to remain with Leinster and Ireland. It will be the centre’s first central contract having previously been on a provincial deal. Meanwhile, Ireland women’s international Claire Molloy tells Gavin Cummiskey this morning that it is a privilege to be on the frontline as she carries out her duties as an accident and emergency doctor in Cardiff. “Everyone is on edge, expecting the storm that we are seeing in our nearby hospital – The Royal Gwent – that has the highest number of cases in Wales. They are showing numbers akin to that of the northern Italian region.” Finally in rugby, the issue of the Six Nations perhaps moving away from terrestrial television and behind a paywall has long been on the agenda and this morning UCD professor James McDermott writes that the Government’s set of listed events needs to be updated to include the tournament in order to save it for wider public viewing.

This morning in our favourite sporting moment series it is the turn of John O’Sullivan who recalls the 1980 Wimbledon singles final as a vivid memory from his childhood when his allegiance to Björn Borg really took off. “I may have been close to shedding a tear, exhausted and overwhelmed by the tension and theatre, and definitely identified with Borg later describing losing that tie break as one of the worst moments of his playing career; mine watching,” he writes.