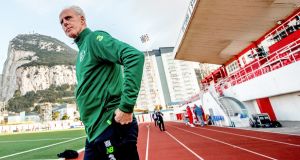 Republic of Ireland manager Mick McCarthy will have his salary withheld during the coronavirus outbreak. Photograph: James Crombie/Inpho

As the FAI announced pay deferrals of up to 50 per cent for its top earners, Fifa has held out the hope that it will provide substantial support to associations struggling to cope with the collapse in revenues which has accompanied the coronavirus crisis.

The association confirmed on Tuesday that all staff earning more than €25,000 will have at least 10 per cent of their salary for April withheld. The scheme will operate on a sliding scale and top earners, including senior team manager Mick McCarthy, will initially be left without half of their money.

Having received a significant boost barely a week ago when a new financing package with Bank of Ireland was formally agreed, the association has been hit on a number of fronts by the Covid-19 pandemic and could well suffer another blow on Wednesday when another conference call between Uefa and its stakeholders may well include a formal announcement that the Euro 2020 playoffs have been pushed back again, this time into next season.

The deferrals are to be reviewed on a month-by-month basis but all of the money withheld, the association insists, will be repaid when the crisis has finally passed and it has resumed normal trading.

“Like the rest of the country, the FAI is now feeling the full financial impact of the Covid-19 pandemic on our projected income streams in these exceptional circumstances,” said interim chief executive Gary Owens in a statement issued shortly after staff had been told of the move.

“The financial challenges faced by the association are such now that we have been left with no choice but to implement these pay deferrals on an equitable basis. Those who are paid the most by the FAI will take the largest deferrals.

“This difficult decision has been taken to protect the viability of the association and the future for our staff. Like other national governing bodies who have taken such measures, we will explore all avenues to help us through this crisis.”

The Scottish FA announced pay cuts of 10 per cent for all staff still working at the organisation on Tuesday but up to 60 employees, roughly a third of the total, have been temporarily laid off.

Tottenham Hotspur, meanwhile, announced a 20 per cent cut for all of its 550 non-playing staff. The club’s players, who earn an average of €86,000 per week, have not yet faced a cut, although chairman Daniel Levy expressed the hope that “the current discussions between the Premier League, PFA and LMA will result in players and coaches doing their bit for the football eco system”.

On Monday, the club issued financial results in which it was revealed that Levy was paid some €7.9 million in salary and bonuses last year.

Fifa, meanwhile, has suggested that it will use its cash reserves of almost €2.5 billion to support member associations and their leagues, something that could provide a critically important lifeline for the likes of the FAI.

A spokesman for the federation acknowledged that the crisis was causing many associations and leagues “serious financial problems” and said it recognised the obligation it is under in the current circumstances to provide support.

The situation,” he said, “threatens to disrupt and impair the ability of Fifa’s member associations and other football organisations such as leagues and clubs to develop, finance and run football activities at all levels of the game, including professional, non-professional, youth and grassroots.

“It is foreseen that in many parts of the world a considerable number of persons involved in football including both men and women players will be left in extremely difficult economic conditions.”

A working group established to assess the situation is due to provide an update this week and it is possible that an initial package of measures could be announced as early as Thursday when the federation is due to meet with representatives of players’ union FifPro and other key stakeholders.

Like everyone else, however, Fifa is struggling to come up with any clear sense of how long the crisis might persist, an important factor in the process of it determining how much support it can provide and over what time frame.

The key item on Wednesday’s Uefa agenda is a review of its plans to get the club season finished. When it deferred Euro2020 for a year two weeks ago, the stated aim was to facilitate the completion of domestic leagues by June 30th but Uefa President Aleksander Ceferin has suggested this week that they might not now actually resume until the end of that month or even after the summer.

As things stand here, the hope is for the Airtricity League to resume on June 19th and while that continues to look to be on the ambitious side, the schedule was not amended at a meeting between the FAI, clubs and the players’ representatives on Tuesday where the possibility of Fifa support was raised.

“It could be hugely important,” acknowledged PFAI general secretary, Stephen McGuinness. “But you would hope that they won’t be using that money to bail out billionaires or the likes of Barcelona. Hopefully it will go to associations and leagues where the players are relying on getting their money.”

1 Sideline Cut: Vignette shows why Bird is the true shark in The Last Dance
2 Farrell and O’Connell provide insight into changes in Ireland’s analysis
3 Liverpool and Everton to oppose plans to play games at neutral venues
4 Niyi Adeolokun and Tom McCartney among Connacht departures
5 Anfield and Cheltenham show sports again lacking in looking after their own
Real news has value SUBSCRIBE
Crossword Get access to over 6,000 interactive crosswords