Dr Claire Molloy: ‘It is a privilege to be on the front line’

Ireland international working as an accident and emergency doctor in Cardiff 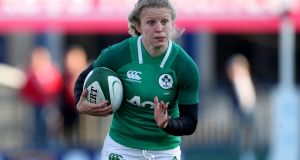 Claire Molloy in action for Ireland during the 2018 Six Nations match against Wales at Donnybrook. Photograph: Bryan Keane/Inpho

Early morning her shift ends and she comes from the florescent into actual light, still expecting to hear rush-hour noise or see the commuter army marching. Instead the city greets her with empty silence straight from the countless Sci-Fi flicks she likes to devour.

“You only meet other healthcare people coming into the day shift,” says Dr Claire Molloy. “It’s very surreal. Cardiff is a ghost town.”

The stroll is her method of decompressing.

“I am exhausted but because it’s 10 minutes away I walk to calm down. I eat something straight away when I get home. Otherwise I’m woken up by a hungry tummy. In the late evening I’d be up, I train and I go to work. That’s the routine of the night shift.”

The surge is only beginning.

“The number of sick patients has ramped up. We had to intubate three last night. Not all corona-suspected, probably one.

“Everyone is on edge, expecting the storm that we are seeing in our nearby hospital – The Royal Gwent – that has the highest number of cases in Wales. They are showing numbers akin to that of the northern Italian region.”

Turns out Claire Molloy is a budding artist. Her sketches, posted on Twitter, revealing yet another talent.

“I picked it up in the last few years as a way to de-stress before games,” said the 31-year-old Ireland flanker. “I needed something to relax and wasn’t keen to be chatting with the girls so I’d find a quiet corner in the hotel, grab a coffee and draw something.”

She would do up her team-mates as animals. Naturally, Lindsay Peat became a sabre-tooth tiger. Hannah Tyrrell a greyhound. Kim Flood a Meerkat. Aoife McDermott a giraffe.

The Ireland rugby squad became her second family – Grand Slam days, beating New Zealand at the 2014 World Cup – but a special (amateur) sports career was paused in 2020 as the NHS fully adopted this Galway lady.

“Fed up being the baby doctor” as throughout training allowances have been made to accommodate her rugby journey. “I needed to step up and put the medical career first.”

Having initially studied in Cardiff, this emergency specialist recently returned from a stint in London playing for Wasps.

Ask around. She’s a constant nuisance over opposition ball, one of the premier openside’s in the world this past decade, with bumps, bruises and scars to prove it.

Back in 2013 she sat exams in an empty room. Just her and Jamie Roberts. “Half my face grazed off me,” following a successful Six Nations campaign. He was about to tour Australia with the Lions and she was off to globe trot on the Sevens circuit.

This evening she’s on her way into A&E as the pandemic grips hold of Wales.

“Can I ring you back in 50 minutes, Gavin? Just want to get a quick workout in while it’s still light out.”

She knows this interview will barely touch off rugby. We are not long chatting when the spectre of Bergamo rises, prompting the question: if capacity is reached, how will the hospital deal with new patients?

“That will be governed by our critical care director and our senior consultant body. We make the assessments and we will make them based on the frailty of the patient. At the moment it is still case by case but that may change. It is a worrying concept if we do get overwhelmed.”

The nearby Principality Stadium is being transformed into a field hospital.

“Katja Empson, our clinical director in Cardiff and lead A&E consultant, has been absolutely outstanding, a heroic leader, who mans the front door.”

The hospital is divided into ‘clean’ and ‘dirty’ areas, the latter being isolated for suspected or confirmed Covid-19 patients.

“There is ongoing continuous training with regards personal protective equipment [PPE] and pathways in how to manage these patients and reduce the exposure for healthcare workers,” Molloy explains, fully cognisant that colleagues will get sick. “Our whole rota is changing to accommodate for staff shortages and provide the best services for what is coming.

“It is the calm before the storm but we are expecting an Italian style situation – as the worst case scenario – which means a lot of training and conversations between all the departments.

“Strange time to be a doctor at the moment.”

Doctors are a funny breed anyway. They almost seem immune to journalists. You meet plenty of them in sporting contexts, from Felipe Contepomi to any number of neurologists on the concussion beat, and they are never intimidated or wary when answering the probing questions (probably because they are light years ahead of us intellectually). If Claire Molloy sketched the hacks we’d be flies scattered by Lindsay Peat’s whipping tail.

The supply of PPE is a major concern in Ireland, are you worried in Cardiff that there will be enough gear to protect you from infection?

“The cleaning staff are the real unsung heroes in all of this,” Molloy replies. “Their workload has been quadrupled. Every single space has been cleaned between every patient. We are very much reliant on them to keep us safe as well.”

Are there enough supplies?

“There is always a contingency plan in place. When the supply gets a bit shorter we get tested for the other masks. We have medical students actually carrying out the fit testing because their training is completely suspended at the moment.

“We are getting more scrubs and kits so we can be as safe as possible. We are becoming a bit more ingenious with our personal protective equipment by making makeshift hats to go with our gear. We are adapting to working in this environment.”

Can you afford to worry about reports that 14 per cent of the infected in Spain are healthcare workers?

“It is a genuine concern for staff, and exposure to family, especially vulnerable members of our families. We have encountered a situation recently with Mother’s Day, and children staying away from their mums if they work in healthcare. If daughters are pregnant the advice is to stay away or if relatives get it you are not allowed to visit.

“It is a genuine concern because it is in the media and no matter what you do you cannot avoid hearing that healthcare and frontline staff are being infected. It is scary.”

Nights in A&E were weirdly quiet last week as a healthy fear exists among the general public about going to hospital for treatment.

“No one enters our department without doing a quick questionnaire about symptoms. They will be directed on the appropriate stream to keep a ‘clean’ route and to keep a ‘dirty’ route as such. We liaise with ambulance crews as well. There will also be someone assigned to the corona unit in full protective kit, which is really warm, but not for the whole shift ideally.

“It has changed the way we manage things. There are conversations with intensive care and critical care with regards ‘do these patients need to be intubated?’ as we are seeing that early intubation improves outcome in this patient group as opposed to a more watchful approach that we would have done previously in respiratory cases.”

The harrowing reality is infected patients are all alone.

“Conversations about deteriorating patients are occurring over the phone because we can’t talk face to face.

“A big element for patients when they deteriorate is they don’t have a member of family there. That has been tricky for staff to cope with. It is emotional as nobody wants to think of their own relative being alone in their final moments.

“It’s such a strange time,” she repeats. “It is a privileged place to be, on the frontline, you do feel like you are contributing to the cause.”

Can you sketch it?

“Oh God no, the coronavirus is really hard to draw. I have drawn it. Got bored. I’ve a short attention span. I do A&E for a reason.”

1 Johnny Sexton: ‘We just know we have to be a lot better in all areas on Saturday’
2 Gerry Thornley: Antoine Dupont and France look perfectly primed for Ireland visit
3 Seán O’Brien: Anger over my parents’ break-up never left me
4 Ireland's centre will hold thanks to Henshaw and Aki’s midfield muscle memory
5 Ole Gunnar Solskjær takes pop at pundits over Donny van de Beek comments
Real news has value SUBSCRIBE

Masters cancel par-3 contest ahead of this year’s tournament 16:24
Delta Work aiming to extend O’Leary’s success in Down Royal festival feature 16:20
Ole Gunnar Solskjær takes pop at pundits over Donny van de Beek comments 16:16
Bernard Le Roux cleared to face Ireland on Saturday after disciplinary hearing 15:55
Johnny Sexton: ‘We just know we have to be a lot better in all areas on Saturday’ 15:43
Crossword Get access to over 6,000 interactive crosswords