Six Nations rugby needs to be protected for terrestrial TV

Competition is not included in Broadcasting Act’s ‘listed’ events, which needs updating 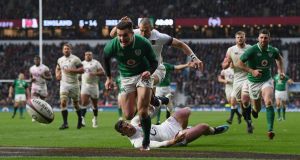 Six Nations matches such as Ireland’s Grand Slam win in 2018 may not be available on free to air TV in the coming years. Photograph: Shaun Botterill/Getty Images

The American poet Gil Scott Heron famously promised that the revolution would not be televised. Recent events suggest that Irish rugby might soon be a case in point.

By far the most memorable sporting revolution of recent years occurred in 2016 when Ireland beat New Zealand 40-29 to finally end a 111-year losing streak at the hands of the All Blacks. Yet despite the significance of the victory few Irish fans got to enjoy it live.

As the game took place in Chicago attendance in person at Soldier Field was financially impractical for most supporters. And while the game was televised live, this took place on Eir Sport 2 so those unable to afford the subscription were unable to view the game.

Even those fans who could afford cable television were much more likely to subscribe to the more established Sky Sports meaning that only the minority able to pay for a second subscription for televised sport had access to the game. In a pre-global pandemic world it was of course still possible to watch matches in the pub but this option was not open to children, the housebound or those otherwise disinclined to go out drinking, all of whom were excluded from viewing this historic occasion live on television.

Worse still this scenario is likely to be repeated much more frequently in the future. The bidding for the broadcast rights for the Six Nations, for the three years from 2022, has just opened and the list of likely bidders includes Sky Sports, BT Sport and Amazon Prime.

Of course it need not be this way. The Broadcasting Act 2009 entitles the Minister for Communications to designate certain sporting events as being of major importance to society and as such they must be made available on national television on a free-to-air basis. This list is reviewed every three years with the last revision having occurred in October 2017. This means that when our next government is finally formed then one of the first tasks on the to do list of the incoming minister will involve updating the legislation.

The most glaring omission from our “listed” events is Ireland’s games in the Six Nations. To be fair these matches do appear on the “deferred list” meaning that delayed coverage of them must be provided on terrestrial television. But in 2020 the ubiquity of social media makes the entire concept of delayed coverage seem somewhat quaint. In the modern world is it remotely realistic to suggest that the Irish public should be satisfied at being asked to wait until, say, 8pm to view a crucial Ireland v England Grand Slam decider that actually kicked off at 3pm?

Worse still is the fact that the European Champions Cup fixtures of all four Irish provinces appear on neither the live nor the deferred list. It is hard to think of many sporting events that have more captured the imagination of the Irish public over the last 25 years than the European triumphs of Munster, Ulster and Leinster. Crucial to the development of this relationship was the reasonable availability of key matches on domestic television but these games now remain largely hidden behind a paywall.

The current list of protected events was drawn up in 2017 and is at best incomplete and at worst incoherent. Other than the fact that the IRFU are much more effective at lobbying the Government than the FAI, it is hard to see why Six Nations matches are not on the free-to-air list but the soccer team’s home and away qualifying matches for both the World Cup and the European Championships are. Is the Nations Cup at the Dublin Horse Show really an event of such “distinct cultural importance” for Irish people that it merits inclusion on the list? To put it another way, how many people ever went down to the local pub to watch it?

The only two new additions to the 2017 list were the All-Ireland Ladies Football and Camogie finals. Women’s sport has enjoyed a long overdue surge in popularity in recent years as shown by the record attendance of 56,114 in Croke Park for last year’s All-Ireland Ladies Football Final. But despite this impressive growth it is hard to explain how a match taking place in a far from full stadium is more deserving of protection than Six Nations matches that have been continually selling out for well over a century. In fact the GAA (and their female equivalents) between them now have more listed events than any other sport despite the fact they lack any real element of international competition making them a much less obviously attractive target for overseas television companies.

It is easy to understand why the IRFU work hard to avoid having their matches listed, since television deals with subscription broadcasters are often worth a multiple of what RTÉ and other domestic channels could ever afford to pay. And although RTÉ is always considered to be free-to-air, even our national broadcaster requires a television licence fee of €160 per annum to be paid. Even in normal times Irish provinces would struggle to compete with their cash rich English and French counterparts without the income from pay-TV. And these are far from normal times with Covid-19 already causing the postponement of Six Nations matches, across the board wage deferrals and the premature end to the domestic club rugby season.

But even in the most difficult of circumstances it is important to remember that our national side represents the whole island every time it takes to the field. If this concept is to be a meaningful one rather than an easy cliché then it is vital that Ireland’s Six Nations matches be listed as soon as possible so that everybody has a reasonable opportunity to see them live.

This may well come at a financial cost to the IRFU, an organisation whose most successful ever sponsorship slogan was “the Team of Us”. But this is a price worth paying to avoid inadvertently instead creating “the Team of Them and Us”.