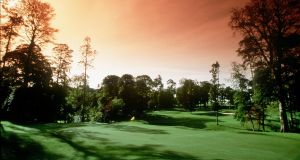 Mount Juliet Golf Course: venue for this year’s Irish Open in late May which now is in severe doubt. Photograph: Inpho

The Dubai Duty Free Irish Open, due to take place at Mount Juliet from May 28th-31st is the next tournament on the European Tour schedule following an announcement on Thursday afternoon that the GolfSixes in Cascais, Portugal (May 9th-10th) and the Made in Denmark tournament (May 21st-24th) had been postponed.

However the likelihood is that the Covid-19 pandemic will force the postponement of the Irish Open sooner rather than later in much the same way it has taken a chunk out of the PGA Tour and European Tour schedules, including golf’s first two Majors of the season, the US Masters and USPGA Championship. Spain’s Jon Rahm is unlikely to be able to defend the title he won at Lahinch last year.

It is not just professional golf that is being laid low by coronavirus, as the majority of Ireland’s top golf clubs are trying to mitigate the financial shortfall of any pronounced reduction in the number of golfers travelling to these shores from America and Europe in the current climate of uncertainty, a situation exacerbated by travel bans and restrictions.

Based on figures from January last year, some 200,000 overseas visitors play golf in Ireland annually, accounting for 1.7 million bed nights and generating about €270 million for the Irish economy.

The clubs are looking to persuade those who can’t travel to Ireland, and have already booked tee-times now or in the weeks and months ahead, to reschedule whether that’s latter this year, next year or even further down the track.

Brendan Keogh is chief executive of Swing (South West Ireland Golf CLG), who has helped to market and encourage green fee traffic from abroad to pursue the sport in a number of clubs in that region for the past 33 years.

Keogh explained: “What we are finding now is enforced situations with the flight ban. The clubs are trying to work in unison and sing off the same hymn sheet. The operative word being used is ‘reschedule;’ for later in the year, for next year of reschedule for 2022. We are still hoping that we can salvage something when this blows over.”

The American market is huge from an Irish golf perspective and there’s no doubt that the fact that the US is behind the curve in relation to addressing the pandemic is a concern for Irish golf clubs.

He continued: “We had a conference call [this week]) with a lot of our clubs and others just to get a general consensus without shoving any conditions down anyone’s throat. The general feeling is to reschedule, try and work with people and try and get people to understand what the situation is. Things change on a daily basis.”

John Lawler, general manager at Royal Portrush, home of last year’s British Open won by Ireland’s Shane Lowry, should have been looking forward to a sizeable financial windfall from those clamouring to play the wonderful Dunluce Links course following last year’s tournament. But recent enquiries have been dominated by American clientele looking to cancel bookings.

“There is anxiety and uneasiness and I don’t think there is clarity around when this will be resolved so therefore, without giving you the specifics, ‘significant’ is what I would say is the volume of contacts, especially from our US guests, around cancellations.

“So there is going to be a big drop in our green fee revenue for the year. We are fortunate in the sense that due to the hard work of the club over the last number of years and the benefit of hosting the Open Championship we are in a pretty good position financially but it will have a major impact on the green fee bookings for the year ahead.

“We are hopeful that in some shape or form this will resolve itself and the reassurance will be there for people that if they have plans later in the summer that they will sit tight and let things develop. Hopefully things will calm down in such a sense that people will be confident enough to travel and play golf.”