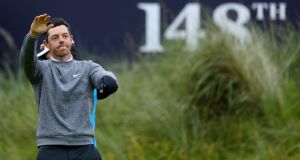 Rory McIlroy acknowledges the crowd on the 18th green after the second round of the British Open at Royal Portrush last summer. Photograph: Oisín Keniry/Inpho

Rory McIlroy turned responses to personal adversity into an art form long ago. His Masters capitulation of 2011 was followed up by winning the US Open three months later. A courtroom appearance against his former management and the high-profile cancellation of his wedding preceded the hitting of professional heights.

McIlroy was at it again last autumn. Five weeks after missing the cut at the British Open – and not any British Open – he took delivery of the FedEx Cup and its $10 million bounty.

He has enough perspective to realise the coronavirus crisis means golf is insignificant now and has joined a social media campaign to that end but, in a purely sporting sense, he must rue this hiatus. We will never know how far McIlroy’s rebound from the gloom of Royal Portrush last July would have taken him in the context of April 2020 and the Masters. Evidence suggested this was his finest chance to complete the Grand Slam of Major titles.

His consistency was rewarded with a return to the top of the world rankings in February. “I don’t think I’ve ever felt this comfortable with all facets of my game,” McIlroy said before sport shuddered to a halt.

McIlroy adopts self-deprecation on being reminded of his sentiments 12 months ago; the British Open’s visit to Northern Ireland for the first time since 1951 was dominating his thoughts. “How did that work out?” asks the 30-year-old with a smile.

“I’ve always been able to turn very difficult things into positives. I’ve been able to respond well and even excel. That comes from reflection, from thinking deep and hard about things. I’ve always had a knack for ‘what happened, what went wrong?’ then making sure I’m better the next time. You might not be 100 per cent better, it could be five to 10 per cent .

“As dejected as I was after Portrush . . . It was a gradual build until I got back to the top spot in the world. That mightn’t have happened if Portrush hadn’t turned out as it did. I had to take a long, hard look at myself. I needed to press the reset button and that might not have happened had I finished 12th or 10th. It was a huge catalyst for me to change a few things. I’ve been disciplined and worked hard.”

The grisly details from Ireland’s north coast will live long in the memory of anyone who witnessed them. McIlroy watched his first shot fly out of bounds. Backed by vociferous support, he came so close to surviving for the weekend but his opening round of 79 proved fatal.

He was close to tears during interviews after the second round, with the complex relationship between a global star and his homeland laid bare. Christmas spent back in Holywood was “a little bit different” as a consequence.

“I have always felt like I’ve been relatable and approachable,” he says. “I think there was a thing back home where people didn’t feel that way about me any more. Because of what I went through at Portrush, maybe to show that vulnerability, people could relate to me a little more again. It’s a weird one.

“When someone becomes who I have . . . I play all over the world and am a very recognisable sportsperson. I come from such a small place, I don’t know if people think you get above your station and forget where you are from? I said it at the time, I forgot how much the place and the people mean to me.”

McIlroy was encouraged to loosen the shackles that naturally tighten as a career plays out so publicly. “I’ve nothing to lose,” he says. “Falling flat on your face in front of your home people, at a tournament you’ve been thinking about for 10 years, that’s the worst that can happen. So what have I got to lose after already experiencing that? Nothing else can top that in terms of disappointment, so let’s go for it.”

In normal circumstances McIlroy would now be in the midst of Masters mayhem but he regularly emphasises the psychological distance he puts between himself and tilts at history. Spend all winter thinking of Augusta? No chance.

“Why would you? I’ve never really done that. I don’t really think about tournaments until I get there. What’s the point? I don’t see the point in over-analysing it. I want to go out and learn everything. If I don’t win it [The Masters], I don’t win it. It’s not a life-changer for me. It’s a golf tournament. It would be awesome and would put me in a place, in the game that I play, of very rare company.

“Wonderful. But I’m not going to cry myself to sleep if I don’t. I think people want to believe it consumes me but it doesn’t. That’s the truth. I think people want to believe it’s the first thing I think of when I wake up and the last thing before I go to bed. And it’s not, life’s too short. I’ve been very good over the last 18 months at staying in the present. If I build things up too much they can backfire.”

McIlroy is equally candid when discussing his emotions at Augusta last year. He was frustrated at not being competitive, a feeling intensified by the prospect of answering questions about Tiger Woods’s epic win for months to come. The cloud lifted sharply.

“I wanted to get out of there,” he says. “It had been a disappointing week, I wanted to get home. I removed myself from it and thought: ‘Jesus, this is unbelievable.’ The longer Tiger is at the top of the game, the better it is for all of us. I messaged him. Anytime I win a tournament or have a chance, he is the first one to text me. All the time. So I always make sure if he is doing anything, that I’m right there.”

The pre-Masters stories around McIlroy had been amusing. The admission that meditation and mindfulness were now part of his routine raised eyebrows. He seemed a tad baffled. “Once I get into things I really get into things. I enjoy reading, I enjoy self-help, I enjoy psychology. I can be portrayed as anything, I don’t care. I know who I am.”

It seems astonishing to think nine years have passed since he threw up his hands in despair during rough weather at Royal St George’s. The British Open is scheduled to return to the Kent course this year but is shrouded in doubt because of coronavirus. “I was impulsive and speaking off the cuff. I played 13 holes in brutal conditions. I got a great draw at Hoylake when I won [in 2014] so, swings and roundabouts.”

Golf has missed McIlroy in that Major-winning scene. The US PGA in 2014 marks the last of his four triumphs. There are mitigating circumstances but they matter not, including to the player himself. “If we played 100-round tournaments I would come out on top every time as shown by my stats. But tournaments are over four. It’s putting those four together.”

McIlroy may be afforded this year’s Masters shot in the autumn. It is such a shame – relatively of course – that for now he is denied the opportunity when his form is so formidable. The grin returns when he contemplates whether any aspect of Portrush can be directly relevant at Augusta National. “At least if I hit it left off that tee, I’ll be all right . . . ” The thrill will be in standing there in the first place. – Guardian

1 Sideline Cut: Vignette shows why Bird is the true shark in The Last Dance
2 Farrell and O’Connell provide insight into changes in Ireland’s analysis
3 Niyi Adeolokun and Tom McCartney among Connacht departures
4 Liverpool and Everton to oppose plans to play games at neutral venues
5 GAA preparing for earlier return to activity but pitches to remain closed
Real news has value SUBSCRIBE

GAA preparing for earlier return to activity but pitches to remain closed 18:07
HRI announces full jumps programme up to start of August 17:03
La Liga season to restart on June 11th with Sevilla-Real Betis derby 16:26
Liverpool and Everton to oppose plans to play games at neutral venues 17:18
Niyi Adeolokun and Tom McCartney among Connacht departures 13:00
Here is your handy guide to sport on television this week