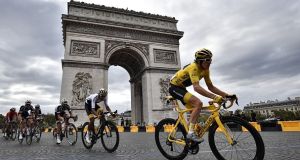 Although measures throughout Europe are being stepped up to combat Covid-19, including ever-tougher steps being taken in France, the organisers of the Tour de France are still hoping that the race will go ahead in July. According to French newspaper Le Parisien, Tour organisers ASO and the French government are together considering how to hold the race in the original time slot, June 27th to July 19th.

The measures under consideration reportedly include blocking spectators from being able congregate at the start and finish areas - a step carried out at ASO’s Paris-Nice race earlier this month - as well as the possible cancellation of the traditional village depart, a publicity area for officials, riders, journalists and other accredited people at the start point of each stage. The scrapping of the publicity caravan which precedes the race is also an option.

“We are in contact with ASO,” the French minister for Sport Roxana Maracineanu told France Inter radio on Monday. “It is of prime importance that these events [the Tour de France and the Olympic Games] be held.”

However with the Olympic Games now on hold for a year, it may be a hard task for the Tour organisers to successfully justify holding the race in July, not least because of the lockdown in force in the country.

The obstacles are exacerbated by the limitations currently being placed on the peloton’s pro riders in France, Spain and Italy. They are unable to train outdoors, while rivals in other countries have no such curtailment in place.

The organisers of the Giro d’Italia plus a number of other events have already said that their races will be postponed and, all going to plan, run off at a later date this year.

Five time Tour de France winner Bernard Hinault has said that the holding of French event is not vital. “The Tour de France is a fantastic party, but life is more important,” he told Le Parisien this week. “We’re talking about the risk of death. We don’t care, frankly, about cycling in a case like this.”

Hinault, who in 1985 became France’s most recent winner of the Tour, said that there is a bigger picture to consider. “It’s a war against a virus. Frankly, we cannot afford to say, ‘we must maintain the Tour at all costs.’ It’s not up to me to decide and there is still time, but we have to ask ourselves if it is reasonable to let people line the roads if there are still risks. The Tour is tens of thousands of spectators every day.”

1 Cheltenham faces criticism after racegoers suffer Covid-19 symptoms
2 Andrew Conway diary: In search of a competitive edge
3 Whole new ball game: Sport will be last duck in the row in return to normal
4 Sonia O’Sullivan: Taming The Tan gave us one last roll of the dice before shutdown
5 Avoid the treadmill at all costs – marathon training in the 2km radius
Real news has value SUBSCRIBE

Greener Pastures: Seinäjoki feels most like home for Tommy Dunne 06:30
‘Every team is in the same position – we all just want to play games’ 06:00
My favourite sporting moment: Shels finally make all the heartbreak worth it 06:00
Cycling: Rás Tailteann postponed to future date due to coronavirus 06:00
Whole new ball game: Sport will be last duck in the row in return to normal 07:05
Here is your handy guide to sport on television this week