In these uncertain times, history reminds us that there has always been a future as well as the past 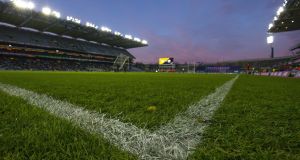 In the days of ‘Breaking Ball’, the GAA television programme in which I had an involvement, one of the most popular elements was a strand called ‘Heaven and Hell’. It was simply a nostalgia slot in which generally players and former players reminisced about extremes of experience.

The ‘Hell’ items were often more striking than the happier memories. In 1999, Galway goalkeeper Séamus Shinners was a model of calm and equanimity when talking about the 1979 hurling All-Ireland when two mistakes triggered the usual tariff from Kilkenny but 20 years on, his demeanour added a melancholy to the recollection.

“After the match had ended, I couldn’t get lost fast enough,” he said. “For 15 years I thought about the goals every day. For five more it was every two days. I get very emotional about it. I would have given my two hands to win that for my county, my family and my friends.”

Another goalkeeper with a similar tale to tell, this time about a Munster final, was John Sheedy. His reaction to the first contact was cheerful but slightly haunted: “I’ve been waiting for this phone call.”

Sport is built for nostalgia. Even outside of these menacing times when nearly all of the touchstones of normal existence have been taken away, the memory of times past is a powerful distraction.

The power of these reminders is twofold: it tells a sport more about itself by reminding it where came from or travelled through and, importantly for the viewer or reader it is a reminder of when they were younger and what they were doing at that precise time.

There has been in recent years a blossoming of historical literature and studies about the GAA and the emergence of a deeper, more complex sense of its past.

Just over 50 years ago in 1967, it was possible for a Croke Park official, Breandán Mac Lua, to declare confidently:

“All the movements which have led to the establishment of the State, which we have, have drawn their members – be they fighting members or active political members – from the ranks of the Gaelic Athletic Association and as such it has been the reservoir of Irish manhood, who have played their part in the evolution of the State.”

That was the conventional view, a year after the 50th anniversary of the Easter Rising. By the centenary of the same event four years ago, views had become more nuanced.

For instance just this week in the GAA’s MacNamee Awards for communications, there was recognition for one of the association’s modern historians, Dónal McAnallen, whose book ‘Forgotten Volunteers’ tells the story of Ulster’s GAA members who fought in the first World War.

The citation for Best Publication of the Year explains: “The book gives an insight into a part of the history of Cumann Lúthchleas Gael that had been left untold up to this time.”

Broadening the historical perspective shifts the association’s founding mythology that it was simply the sporting expression of the independence movement, a ready supplier of manhood to the cause, as in Mac Lua’s interpretation.

Certainly it did fulfil that role but as a mass-participation sporting outlet, it was clearly already a broad church and aware of that when distancing itself from the Rising when it happened.

Modern sport, though, is more about the games and the community experience of engaging with them. Watching old All-Irelands is also a way of connecting with the GAA’s heritage.

By coincidence, today, April 1st, is the 86th anniversary of a special publication on Easter weekend 1934 by the Irish Independent to mark the golden jubilee of the GAA. Even at that comparatively early stage, there were signs of the combined mission statement that projected nationalism – and the influence of clericalism – as well as the allure of the games.

A large portrait of general secretary Pádraig O’Keeffe refers to him in the caption: “An active volunteer in the Black and Tan War, he was captured and imprisoned.” There was a similarly imposing picture of Irish Primate Cardinal MacRory plus a message from him and the same treatment for the then GAA patron Dr John Harty, archbishop of Cashel.

These are formalities, though, and most interest presumably focused on the games-related coverage, such as a list of great players, teams and clubs from the first 50 years of the Gaelic games. We are told that six players have won six All-Ireland medals, predictable mostly Kerry footballers but also one Kilkenny hurler.

There is a special mention for the five players, who have won both football and hurling All-Ireland medals, a feat virtually impossible in the modern game. Frank Burke is already the only player to have done this more than once. From Kildare, his playing career was with Dublin, for whom he played both games while becoming headmaster of Pádraig Pearse’s school, St Enda’s.

Captioned ‘The Greatest,’ he is listed with Wexford pair Seán O’Kennedy and PJ Mackey, who both won hurling All-Irelands in 1910 before going on to be part of the county’s pioneering four-in-a-row football team, 1915-18.

Billy Mackessy of Cork is also honoured, whereas the final member of the distinguished sextet is oddly, a Kilkenny man, Pierce Grace of the famous Tullaroan family. His three hurling medals were conventionally won with his own county but he also picked up a Celtic Cross in football with Dublin, “during his student days in 1908”.

The 96-page publication is a fascinating snapshot of an organisation growing in confidence, reflecting on where it came from but also on what is clearly seen as its bright future.