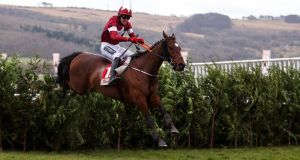 Tiger Roll was an impressive winner over hurdles at Navan. Photograph: James Crombie/Inpho

The odds on Tiger Roll emulating Red Rum and winning the Aintree Grand National back-to-back have tumbled after a remarkable 25-1 success over hurdles at Navan on Sunday.

The Grade Two is often used as a stepping stone to Cheltenham’s Stayers Hurdle and in terms of style alone Sunday’s performance might be an argument for Tiger Roll to try and land a fourth different race at the festival next month.

Gigginstown Stud’s diminutive star landed the Triumph Hurdle as a four year old in 2015 and has repeatedly belied his stature since, winning Cheltenham’s four-miler in 2017 and the Cross-Country event last year.

Trainer Gordon Elliott indicated on Sunday Samcro is back in Cheltenham calculations - with the Stayers his target - so wasted no time confirming it is going to be the Cross-Country event again for Tiger Roll next month.

The hugely popular stalwart is a hot 11-10 favourite for that and Elliott admitted: “He’s going to be some horse to go for the Cross-Country now - he should take a fair bit of beating!”

Elliott has described that event as Tiger Roll’s ‘Gold Cup’ this year and the horse does face a much stiffer Aintree task in April.

He has a 9lb higher rating compared to when memorably just holding Pleasant Company in the world’s most famous steeplechase in 2018.

No horse since the legendary Red Rum (1973-74) has managed to retain the National crown and ‘Rummy’ defied 12st in doing it.

Like him Tiger Roll is no giant but Sunday’s Boyne Hurdle victory also indicated the current title-holder’s capacity to confound expectations.

Widely assumed to be a pipe-opener for bigger targets ahead, Tiger Roll instead put up one of his most impressive performances over the smaller obstacles.

With the 5-4 favourite Bachasson fading to fourth, and Off You Go meeting a little interference in the straight, Tiger Roll always looked to be going best.

“It’s a nice surprise. I thought the two horses, Bless The Wings and him, would finish second last and last!” Elliott admitted.

“I thought he’d need the run badly and we knew there was plenty of improvement in him. But he was obviously a bit fitter than we though. Keith said he’d come on from the run,” he added.

In that context perhaps it’s no surprise Tiger Roll is clear favourite to emulate the most famous National name of all.

1 David Clifford sends everyone back to their corners unbeaten
2 Six Nations: Ireland are contenders but England still the team to beat
3 James Durcan steals a draw for Mayo in Ballybofey
4 Mike Catt hopes to have Irish backs purring in Six Nations
5 Communication is key for new FAI president Gerry McAnaney
Real news has value SUBSCRIBE