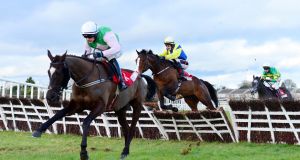 Irish racing’s chief veterinary officer expressed satisfaction at how bio-security measures implemented over the weekend helped ensure the sport could continue here. With British racing still in lockdown due to equine influenza, Ireland had the stage to itself over the weekend.

Like Naas the day before, Sunday’s Punchestown card saw extra hygiene precautions being taken throughout the course, particularly with horses arriving at the track.

“Every horse coming into the stable yard today has been inspected and if necessary checked,” said the Irish Horseracing Regulatory Board’s chief veterinary officer, Dr Lynn Hillyer. “We did check a couple of them, for temperatures and to have closer look, and they were fine.”

Ireland’s authorities decided on Thursday to keep racing here despite the British Horseracing Authority taking the dramatic step of shutting down all cross-channel action until Wednesday at the earliest.

Irish racing’s decision was however quickly followed by a series of IHRB measures announced on Friday including one that requires horses to get mandatory extra vaccinations.

“The new vaccinations mean the horse is covered for eight weeks from the day it gets it,” Hillyer explained on Sunday. “Once a horse gets the vaccine it does have a stand down period of six days where it can’t race. That’s why we were in such a hurry to make the announcement on Friday. It means horses can get the vaccine and be able to race next weekend.

“We are here today, and we were at Naas yesterday, to ensure our new and enhanced bio-security measures and checks got up off the ground and we’re happy with how they’re working. We’re also here to be available to trainers and anyone else,” she added.

The next fixture in Ireland is at Fairyhouse on Wednesday but a decision on whether or not racing can resume in Britain on the same day won’t be made until Monday.

The British Horseracing Authority said on Sunday evening no further positive cases have been identified although it confirmed a non-thoroughbred unvaccinated horse has to be put down having contracted the flu virus.

A spokesman said a “pragmatic and evidence-led approach” is being adopted by the BHA about whether racing can resume on Wednesday.

“A prioritisation plan for testing is being adopted which is based on the proximity of horses to a positive test, or to a yard returning a positive test,” a BHA spokesman said.

“Separately, a specific plan is being formed as to what the clearance process will be for individual yards to return to racing. This process will remain ongoing with a view to sufficient evidence being gathered to make a decision on Monday evening as to whether racing can return on Wednesday,” he added.

One of the perks of winning Sunday’s €100,000 Boylesports Grand National Trial was a free entry for the winner into the Irish National on Easter Monday, something unlikely to sway the campaign plans of Ryanair boss Michael O’Leary for his 20-1 winner, Dounikos.

O’Leary enjoyed a 1-2-3 in the race as Dounkos was followed home by another Gigginstown Stud owned pair, Wishmoor and the 2018 Irish National hero, General Principle.

The big race sponsors installed Dounikos at 33-1 to score at Fairyhouse although there 25-1 odds for the Aintree National appeared to chime more with trainer Gordon Elliott’s opinion.

“I think he could be an English National horse myself,” said the man who saddled last year’s Aintree champion, Tiger Roll, and originally shot to fame with Silver Birch’s Liverpool victory in 2007.

“He went well in the Paddy Power at Christmas for a long time but at Gowran (Thyestes) he was never happy. For a big horse he probably likes a bit of good ground. The weights are out this week for the National and I’ll have over 20 entered,” Elliott added.

Rachael Blackmore’s mount had three quarters of a length in hand at the line and was cut to 7-1 for next month’s mares novice hurdle at the festival.

“We will have to consider it for her now. We are in a very fortunate position having Honeysuckle who is owned by Kenny (Alexander) as well.

“Both will stay further so maybe we could look for an option for one of them to run against the geldings. I’m delighted to win today and get black type as she has a savage pedigree,” De Bromhead said.

Martin Brassil has a Cheltenham contender in Saturday’s Naas scorer City Island and Take Revenge completed a weekend double by landing a maiden hurdle at Punchestown.

“He’s in the Ballymore but I only put him in as an afterthought in case anything happened the other horse,” Brassil said.

“City Island took his race well. I’ll try and keep him in the same frame of mind and same level of fitness. The race will have done him good,” he added.