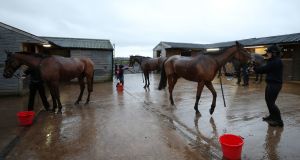 Racehorses return from a gallop in Worcestershire this morning. Racing in Britain will not resume until February 13th at the earliest. Photo: PA

Concern that an outbreak of equine influenza (EI) could extend the shutdown of British racing beyond next Wednesday deepened on Friday, when the British Horseracing Authority (BHA) confirmed that what is suspected to be a fresh case of the disease has been identified in a stable whose recent runners had no obvious point of contact with Donald McCain’s yard in Cheshire.

The news followed the disclosure that McCain’s gelding Raise A Spark, who finished last in a race at Ayr on Wednesday, had tested positive for EI.

The yard housing the suspected fresh case of EI has yet to be identified but sent runners to the meetings at Newcastle on Tuesday and Wolverhampton the following evening. As a result, a further 52 training yards which also had runners at these meetings have been added to those on ‘lockdown’ after the initial outbreak at the McCain stable, bringing the total number of yards on lockdown to 174.

Raise A Spark is one of three fresh cases of EI identified at McCain’s Bankhouse Stables following tests on the trainer’s entire string on Thursday. The nine-year-old is the only one of what is now a total of six horses in the yard to have tested positives for the disease which had raced in recent days.

The BHA’s latest update on the EI outbreak said that the test result from Raise A Spark “relates to a sample taken the following day [February 7th], and the horse showed no clinical symptoms [of EI] on raceday.”

It continued: “It was in anticipation of this risk that the decision was taken by the BHA to restrict movement of horses on a precautionary basis at the yards of 120 other trainers who competed at these fixtures, and to suspend racing until Wednesday at the earliest. This action was taken to mitigate the impact of any of the runners which competed at these fixtures being found to be infected by the virus.”

All horses which are in yards currently on lockdown will be tested for EI. However, the BHA admitted on Friday that the large number of tests now required means that the results of all its tests will not be known by the end of the weekend, when the Authority needs to decide whether there is a need to extend the current shutdown of British racing beyond next Wednesday.

“The BHA is working closely with the Animal Health Trust,” its statement said, “in order to manage the logistical challenge of providing sufficient swabs and handling the volume of tests being sent through the facility, considering that testing of a total of 174 yards is now taking place.

“It will not be possible to test every horse from every yard before the end of the weekend, but we will work with trainers to identify any priority or risk horses and ensure that they are tested. This will all form part of the picture that is built in order to assist the decisions that will be made on Monday.” – Guardian