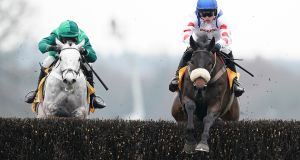 Clan Des Obeaux cemented his Cheltenham Gold Cup claims with a facile success in the Betfair Denman Chase at Ascot.

This recognised trial for the blue riband at Prestbury Park next month was swiftly re-scheduled following the abandonment of racing at Newbury last Saturday because of the outbreak of equine influenza.

With connections of last season’s Gold Cup hero Native River deciding against running at Ascot, Clan Des Obeaux’s task appeared significantly more straightforward than it would have been at Newbury a week ago — and he was priced up accordingly as the 2-5 favourite for Paul Nicholls.

Nicky Henderson’s grey Terrefort led the four-strong field for much of the three-mile journey under Nico de Boinville, with Clan Des Obeaux always in his wing mirrors in the hands of an ultra-confident Harry Cobden.

Terrefort stuck to his task gamely, but Clan Des Obeaux breezed alongside before taking over the running on the run to the final fence — and a huge leap sealed his victory.

The way he extended lengths clear on the run-in was particularly impressive, and Paddy Power reacted by cutting his price for the Magners Gold Cup on March 15th to 6-1 from 8-1.

Earlier Cheltenham Gold Cup winner Coneygree has been retired, connections announced after the 12-year-old pulled up at Ascot.

Coneygree, who won the Festival feature in 2015 as a novice, was having only the 18th race of an injury-curtailed but glorious career in Saturday’s Keltbray Swinley Chase on Saturday.

He led until the 14th under Nico de Boinville, reviving final memories of their greatest triumph together nearly four years ago — but the exertions told as Coneygree was eventually pulled up two from home in the Listed handicap won by Calipto.

“Wear and tear and injuries have just got the better of him now, so we’ll call it a day,” she told ITV Racing.

“I’m only sad because he (still) loves it. He still thinks he’s a racehorse.

“I think what happens now is that it would be fine (to run him) on the perfect bit of ground and on the perfect day — but you can’t risk hurting him for that. ”