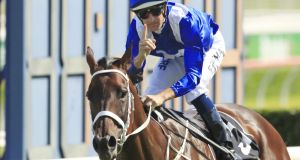 Australia’s superstar mare Winx notched up her 30th successive victory with another dominant display in The Star Apollo Stakes at Randwick.

Making her first appearance since claiming an historic fourth Cox Plate at Moonee Valley in October, Chris Waller’s seven-year-old was unsurprisingly a long odds-on favourite to extend an unbeaten run which stretches back to April 2015.

With regular partner Hugh Bowman in the saddle, Winx was dropping from a mile and a quarter to just seven furlongs on her eagerly awaited return.

The mighty mare was being nudged along in midfield rounding the home turn, but soon engaged her trademark finishing kick to run to the lead and win comfortably by two and a quarter lengths from Happy Clapper.

An emotional Waller told www.racing.com: “It is just a sense of relief — we take it so personally. She can’t tell us when she has had enough, we made the decision to push on a bit further. She is pretty good.

“It’s indescribable for any sport and racing. It’s exactly what we need and why this sport is so great.”

No retirement date has been set for Winx, with connections continually insisting her career will now be taken one race at a time.

The next likely port of call is the Chipping Norton Stakes back at Randwick in Sydney — a Group One prize she has already won three times.

“I think today’s race was the most important — seeing her come back like that,” Waller added.

“The natural improvement will be there and two weeks’ time will be the plan — the Chipping Norton.

“Last year we didn’t have the beauty of having a first-up run — she went straight into it.

“Look out in two weeks’ time.”

Bowman said: “The pace of the race was very even, which suited us. I just had to niggle her to hold her position closer than I normally would over a bit further.

1 Sideline Cut: Vignette shows why Bird is the true shark in The Last Dance
2 Coming fourth in the Olympics didn’t change this fearless quartet, time did
3 GAA preparing for earlier return to activity but pitches to remain closed
4 Brendan Rodgers says he was ‘really knocked’ by coronavirus
5 Anfield and Cheltenham show sports again lacking in looking after their own
Real news has value SUBSCRIBE