Response to equine flu beginning to look like an over-reaction

By completely shutting down racing, BHA may have made a rod for its own back 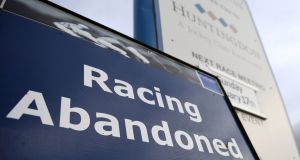 A sign at Huntingdon Racecourse after a bout of equine flu forced the cancellation of all British racing last Thursday. Photograph: Joe Giddens/PA Wire

Each day that passes without racing in Britain adds to the suspicion of authorities there having created a rod for their own back by responding to the outbreak of equine flu the way they have.

Bringing racing to a halt for a minimum of six days after a number of vaccinated horses at Donald McCain’s stables tested positive for equine influenza was a dramatic step by the British Horseracing Authority (BHA).

McCain had runners at both Ayr and Ludlow last Wednesday. A rapid chain of events ensued which saw every other yard represented at those meetings enter “lockdown” as an enormous programme of testing began.

Designed to stop the virus from spreading, it was initially generally accepted within racing as a decisive attempt to contain the problem just weeks from the Cheltenham festival.

It’s also a step taken within a context in recent months of the BHA coming under pressure on a number of animal welfare issues.

The welfare of Britain’s thoroughbred population was presented as the paramount reason for what was hoped would be a short-term shutdown.

However, on Sunday night came confirmation that in addition to the half dozen positive tests at McCain’s yard, four more horses tested positive at Simon Crisford’s Newmarket stables. There appears to be no link between the two outbreaks.

That put into doubt original hopes for racing in Britain to start again on Wednesday.

Elimination of the virus appears to be the standard if racing is to resume. But it is increasingly looking unrealistic. The reality in most racing yards seems to be that flu of some kind is always present.

“I take temperatures of every horse in the yard, every day. And every day of my working life a horse will spike a temperature,” one of Ireland’s top trainers, Ger Lyons, said on Monday. “All you do is give them a day or two off and they’re 100 per cent.”

That daily reality is hard to square with the guidelines that prompted last week’s shutdown. If there are “bugs” constantly swirling, and horses always under the weather, and official BHA policy to an outbreak is to go into “lockdown”, it invites speculation as to when racing can ever begin again.

What happens next week, or next month, in the event of more horses testing positive for equine flu, and if either they or their stable companions have been at the races? Does it mean more shutdowns?

Such a standard doesn’t look sustainable, and increasing numbers of leading racing figures in Britain are pointing that out.

One of British jump racing’s leading owners, Dai Walters, said on Monday he believes the BHA shutdown to be “idiotic”.

Walters said: “Every yard has boxes away from the main stables where they can isolate any horses that get ill.

“Fair enough, close down the yards with horses that have picked this up. But to close down racing altogether is idiotic in my view – they’ve lit a fire they can’t put out.”

It certainly leaves the BHA with the tricky dilemma of trying to find a way of getting racing back on the road while also appearing to live up to the exacting welfare standards it has set for itself.

The response is starting to look like an overreaction to a nasty virus which nevertheless is endemic in the equine population in these islands.

Fears about a threat to the Cheltenham festival going ahead next month are mostly in a context of memories of 2001’s foot-and-mouth outbreak.

But equine flu is not a notifiable disease like foot-and-mouth. It isn’t a virulent infection like strangles. It doesn’t constitute the danger that equine herpes presents. The response to flu looks disproportionate.

Last summer, the yard of Yorkshire-based Irishman Kevin Ryan was placed under quarantine order after an outbreak of equine herpes. The neurological form of the virus can be devastating and potentially fatal. It is a disease that horse people fear and dread.

Ryan’s stables were immediately put in lockdown. His is one of the biggest flat operations in Britain and it was at the height of the flat season. Yet racing continued. Within less than a month Ryan was free to race his horses again.

There have been a number of equine flu cases in Ireland in recent weeks. A quarantine situation was created at the stables involved, and the problem looks to have been contained. The names of the trainers involved aren’t being released.

Irish racing has continued during the shutdown in Britain. On Monday the decision was taken to allow British horses run here again after a last week’s announcement that British entries wouldn’t be taken.

The complicating factor the BHA has had to battle is that horses from affected yards have been to the racecourse. That inevitably increases the risk of contagion.

The BHA’s initial response now looks to leave it with a difficult circle to square. But a solution needs to be found.