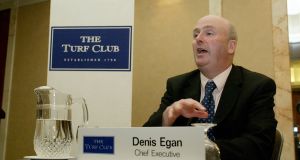 Denis Egan: “Under the new penalty structure, a positive test may in effect end a rider’s career.” Photograph: Morgan Treacy/Inpho

The move by the Irish Horseracing Regulatory Board comes on the back of five riders testing positive for cocaine in Ireland last year.

That brought the total of positive tests for the drug to 13 in the past four years. It is understood details of a positive test are also pending on another jockey.

In the past four years there has been no positive test for alcohol returned in Ireland.

After last month’s Referrals Committee hearing, which saw Damian Melia and Conor Murphy suspended, a new starting point penalty of five years for positive tests was announced in the hope it will act as a deterrent.

On Friday the board confirmed anti-doping seminars would take place on March 5th at Keadeen Hotel in Newbridge and on March 20th at the Horse & Jockey Hotel in Co Tipperary.

They will detail how the testing process works, what a rider needs to declare, and also outline supports that are available to jockeys in relation to addiction issues.

Attendance by apprentices and claiming/conditional riders at one of the seminars is mandatory. Professional and amateurs are also “strongly encouraged” to attend.

The board’s chief executive, Denis Egan, said the aim was to familiarise riders with the rules and “the implications of what will happen if they return a positive test. Under the new penalty structure, a positive test may in effect end a rider’s career.”

He also confirmed testing would be introduced at point to points in the coming weeks.

The move is supported by the Irish Jockeys Association. It has said the cocaine problem within racing reflects a broader social context. However, it has also said the sport has specific issues in relation to jockeys maintaining low weight levels and the toll on mental health that can take.

The association’s secretary, Andrew Coonan, said last month: “Riders must be protected on the track. When I go out to compete, with all the dangers I take on, I have to be at least satisfied the guy beside me is in as much control as one ever can be on a thoroughbred at high speed.”