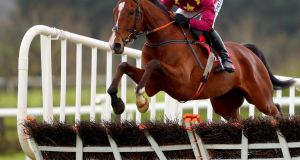 Monalee led his rivals a merry dance on his way to claiming top honours in the Red Mills Chase at Gowran Park.

Runner-up to Cheltenham Gold Cup favourite Presenting Percy in the RSA Chase at Prestbury Park last March, Henry de Bromhead’s eight-year-old was last seen chasing home another leading candidate for the blue riband in Kemboy in the Savills Chase at Leopardstown in December.

With Presenting Percy a surprise absentee after the declarations on Friday, Monalee was the even-money favourite to open his account for the campaign – with Rachael Blackmore on his back for the first time.

Monalee was soon bowling along at the head of affairs and some slick and accurate leaps kept the pressure on his three rivals.

Last season’s Cheltenham Gold Cup third Anibale Fly emerged as the biggest threat at the top of the home straight, but try as he might, he was unable to reel in Monalee – who came home with two lengths in hand.

Last year’s Irish Gold Cup winner Edwulf was a further 25 lengths away in third, with Killultagh Vic last of the four.

“He jumped brilliant and Rachael was super on him,” said De Bromhead.

“I’m delighted to win it, he’s giving away 7lb to a couple of them there. It’s great to win this race and I’m delighted with him.

“It was great to get a run into him on that ground today. Obviously we’ll head for Cheltenham and we’ll see.

“He’s in the Ryanair and the Gold Cup and we’ll work it all out between now and then.

“I wouldn’t be leaning any way to be honest. I don’t know yet and I’d say the ground will be quite telling.

“We’ll see nearer the time and make sure he comes out of this okay. We’ll discuss it with the Maloneys [owner] and hopefully we’ll make the right decision.”

Darasso ran out a dominant winner of the Red Mills Trial Hurdle at Gowran Park.

A multiple winner over hurdles and fences in his native France, the JP McManus-owned six-year-old was pitched in at the deep end on his Irish debut last month – finishing fifth behind Presenting Percy in the Galmoy Hurdle at this venue.

Dropping from three to two miles for this Grade Three assignment, Joseph O’Brien’s inmate was a 2-1 joint-favourite – along with the Gordon Elliott-trained Coeur Sublime – and was settled in behind the pace-setting Forge Meadow much of the way.

Darasso had to be nudged along heading out on to the second circuit as last year’s winner Forge Meadow attempted to make all.

However, O’Brien’s runner responded to Barry Geraghty’s urgings – and after mastering Jessica Harrington’s mare in the straight, ultimately went on to win emphatically by 11 lengths.

O’Brien said: “He ran well enough here the last day in a good race, but I’d say coming back in trip was a help to him – and he likes soft ground.

“Barry gave him a good ride – he kept him in the race without forcing him too much.

“I guess we’ll stick to these kind of graded races, because he’s too high really for handicaps. He could have a shot at a Grade One later in the year.”

Forge Meadow boxed on to fill the runner-up spot, with Rashaan making late gains to beat Coeur Sublime to third.