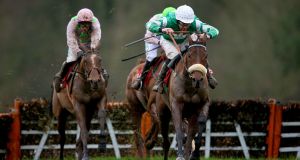 Cheltenham Gold Cup favourite Presenting Percy could line up in steeplechasing’s blue riband without having raced over fences in a year.

The decision to skip Saturday’s Red Mills Chase at Gowran leaves next weekend’s Bobbyjo Chase at Fairyhouse as a last-ditch opportunity to give Presenting Percy a pre-festival warm-up.

However, connections don’t appear concerned if last season’s RSA hero goes to Cheltenham with just one run over hurdles under his belt this season.

“Pat [Kelly] is in no rush with him and if we decide to go straight to Cheltenham then so be it,” said Presenting Percy’s owner, Philip Reynolds, on Friday.

“All is good. He schooled this morning and there are no problems. Pat and myself had a good chat and he is just happy where he is and didn’t feel we needed to run him this weekend,” he added.

Willie Mullins’s prime Champion Hurdle candidate Laurina may appear at Punchestown on Wednesday but, that prospect apart, and with just over three weeks to go, the festival countdown looks to be on.

For Rachael Blackmore, a first Cheltenham festival victory would put a seal on what is already a landmark season and which could yet see her crowned Ireland’s first female champion jockey.

Blackmore goes into the weekend action trailing Paul Townend by six winners (82-76) but with an enviable book of rides that include festival prospects Monalee and Chris’s Dream, both of which she rides for the first time.

With Cheltenham’s shadow looming larger, like every rider Blackmore is starting to consider what festival ammunition she can call on.

Although reluctant to take anything for granted in terms of firm commitments, the groundbreaking jockey admitted on Friday: “Obviously I’m in a better position this year than I was last year. Getting rides at Cheltenham is hard enough – riding a winner there would be great.”

Blackmore, who has a central role in Thursday’s TG4 documentary Jump Girls, has ridden Honeysuckle – a 4-1 ante-post favourite for the Mares’ Novice Hurdle at the festival – to all three of her victories this season.

However, her stable companion at Henry De Bromhead’s yard, Monalee, will be the focus of attention at Gowran.

The Grade One winner was runner-up to Presenting Percy in last year’s RSA and is as low as 20-1 for the Gold Cup. However, he is an even shorter 8-1 for the Ryanair Chase.

“I’m not sure what the race will tell us in regards to future plans, but I hope the trip on Saturday should be ideal for him,” De Bromhead said.

In the absence of Presenting Percy, the four-runner Red Mills could boil down to Blackmore’s mount and last year’s Gold Cup third, Anibale Fly.

If De Bromhead’s comments suggest the shorter festival option might wind up best for Monalee, then the three-mile stamina test of Sunday’s Ladbrokes Ten Up chase at Navan might see Chris’s Dream earn an RSA ticket.

He was ultimately a little disappointing when runner-up to Ballyward at Naas when Champagne Classic was just behind him on his return to action.

The unpredictable “bounce factor” could arise again with Champagne Classic, and the suspicion is Chris’s Dream is better than he showed last time.

The Grand National hero Tiger Roll lines up in the Grade Two Boyne Hurdle on Sunday where both his trainer Gordon Elliott and Willie Mullins dominate numerically.

Off You Go is the odd one out, although the way he won a handicap at the Dublin Racing Festival suggests he can successfully make the step up to pattern company.

1 Gerry Thornley: After 32 weeks the Six Nations is back up for grabs
2 Extremes of sweet and sour for Solskjaer as Man United show signs of revival
3 Johnny Sexton aware of how Ireland can offer fans an escape
4 Arsène Wenger: Arsenal was a matter of life and death to me
5 Stockdale and Ringrose on board with expansive Irish game plan
Real news has value SUBSCRIBE