Trainers’ preparations for Cheltenham and Aintree will involve strict risk-management 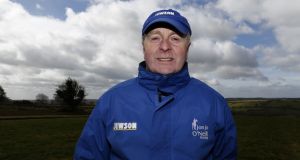 Jonjo O’Neill: ‘When you take out your trainer’s licence, you abide by the rules, as we all have. So why change them? You can’t do that.’ Photograph: Alan Crowhurst/Getty Images

The major jumps festivals at Cheltenham and Aintree are both likely to be staged with strict “risk-management” protocols still in place to prevent the spread of equine flu, the British Horseracing Authority (BHA) said on Tuesday.

However, the new rules, which will be in place when racing resumes on Wednesday after a six-day suspension, are already attracting fierce criticism, with an unknown number of National Hunt horses due to be barred from racing unless they have received a “booster” vaccination in the last six months.

From Tuesday, declarations to race will be accepted only from stables where the BHA believes the risk of infection or spread of equine flu is extremely low, and runners will not be allowed access to a racecourse unless they have been vaccinated for equine flu within the last six months. Their trainers will also be required to submit a declaration that the horse has been free of flu-like symptoms for the previous 14 days.

The BHA’s insistence on a booster jab within the last six months will cause particular problems for jumps trainers, many of whom are preparing horses for the Cheltenham Festival, which begins on March 12th.

The BHA admitted during a media briefing on Tuesday morning that since vaccination records are not collated on a central database, it is unaware how many horses will be affected by the new rule.

Most National Hunt horses, though, receive flu jabs over the summer and any which were vaccinated before mid-September will be unable to race at Cheltenham unless they receive a booster beforehand. This, in turn, will rule them out for seven days, while many trainers also give horses at least a further week off serious work after a flu jab.

As a result, many trainers’ plans to give “prep” races to their horses before the Cheltenham Festival have been thrown into confusion. Verdana Blue, the winner of the Christmas Hurdle at Kempton, has already been ruled out of her intended prep run this weekend.

Schedules for possible runners at Aintree in early April will also be affected and One For Arthur, the 2017 Grand National winner, will be forced to miss the Grand National Trial at Haydock Park on Saturday.

Trainers expressing their anger at the six-month rule include Jonjo O’Neill, whose Grand National candidate Minella Rocco is in need of a run. “He was going to Ascot on Saturday but now he won’t be able to run because of all this nonsense,” he said. “I’m desperate to get another run into him, just to see if he’s improving. Otherwise, there’s no point in going for the National.

“There’s loads of people in the same boat. There’s people want to run at Musselburgh tomorrow and don’t know if they’ll be able to. It’s a complete shambles, absolutely ridiculous. When you take out your trainer’s licence, you abide by the rules, as we all have. So why change them? You can’t do that.”

Nick Williams, who has several entries for the meetings at Haydock Park and Huntingdon this weekend, added: “Absolutely ridiculous for the BHA to create a new rule overnight about horses needing vaccinations in past six months,” Williams said on Twitter. “This must have been in the pipeline for a few days and everyone could have been notified much before. Another eight days without racing for us.”

Brant Dunshea, the BHA’s chief regulatory officer, said on Tuesday that the risk-management regime was essential to allow racing to resume.

“The reasoning behind this [the six-month stipulation] is that it will increase the level of immunity,” Dunshea said, “by ensuring that vaccinations are current to mitigate the chance of horses picking up the virus.