Cilaos Emery foils Melon as Labaik digs his heels in 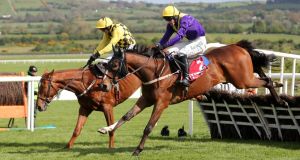 Cilaos Emery sprang a surprise when leading home a one-two for Willie Mullins in the Herald Champion Novice Hurdle at Punchestown.

Ridden by David Mullins, the five-year-old mowed down stablemate Melon on the run-in, after they jumped the final flight together, to take the Grade One spoils by one length.

The race lost some of its gloss when Labaik reverted to his old tactics of being stubborn at the start and refusing to go off with the others.

The Gordon Elliott-trained grey only consented to race for Jack Kennedy after his six rivals had been gone some time, so he never got the chance to supplement his Supreme Novices’ Hurdle triumph over Melon.

The latter was soon in front and was joined a long way out by the Colin Tizzard-trained Pingshou. The pair took each other on, allowing Cilaos Emery to come from way off the pace and pinch the prize.

The winner was given an opening quote of 25-1 for the Champion Hurdle with Paddy Power.

Mullins said: “I’d imagine Davy Russell and Ruby just took each other on and went too fast down the back. As much as Ruby thought he should let Davy on, if he had let him on and he beat him he would have kicked himself, so he had to go with him.

“Davy Russell obviously thought he had more stamina than he did, so the two of them cracked and then David Mullins was able to settle in behind them and come with a wet sail.

“I’m disappointed for Melon, but Ruby couldn’t do much more and had to go with the other horse.

“Today it looked like the two in front cut each others throats. He missed the third-last which would have left a bit more in the tank. I think there is still plenty improvement in him.”

He went on: “We decided to ride Cilaos Emery a little differently today and waited more. He deserved it. He’s a horse that has disappointed on his last couple of runs.

“He has a Grade One now and it’s fantastic for Luke (McMahon, owner), who is a great supporter of the yard. He gets his day and we’re delighted for him.”

When asked what he thought when Labaik stood still at the start, Mullins replied: “That was unfortunate, but he’s liable to do that.”

The one-two helped move Mullins closer to Elliott in the trainer’s title, with the gap reduced to €319,405, but he said: “There is a long way to go and we’re not under any illusion. It’s a good start and we’re delighted.”

Western Boy (14-1) overcame a long absence to bounce back to form in the Killashee Handicap Hurdle.

The Pat Fahy-trained gelding had not run over obstacles since stumbling and slipping up when holding every chance in the same race 12 months ago.

The eight-year-old had only one run in the last year, on the Flat at the Curragh in August, but showed no signs of rustiness as he was delivered with a well-timed run by Jody McGarvey to score by a length and a half from Light That.

Top amateur Derek O’Connor brought the 12-1 shot with a sweeping run in the straight to land the spoils by a battling neck from Hollowgraphic with Early Doors a length and three-quarters away in third.