Your all in one preview, tips and analysis of the opening day at the Punchestown Festival 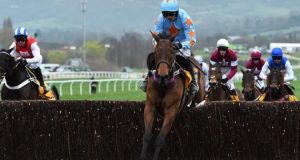 The feature races on each of the first four days at this Punchestown festival are worth €1 million, and Willie Mullins might have to win all of them if he is to overhaul Gordon Elliott in the race to be champion trainer.

There’s almost €3 million in total up for grabs until a momentous 2016-17 National Hunt season winds up on Saturday, and the man who has dominated this festival like no one else will have to dominate like never before to deny his rival a first trainer’s title.

Elliott’s €4,046,980 prizemoney haul to date means he is just over €400,000 clear and appearing to be in command. So it is hard to overstate how much Mullins has riding on Un De Sceaux living up to his billing in the Boylesports Champion Chase.

It is the first of four races this week worth €250,000, and those Mullins loyalists who have nibbled away at his outsider odds of denying Elliott at the death have presumably factored in the flamboyant Un De Sceaux as a Closutton banker.

Should Un De Sceaux put up an exhilarating display in the manner of his Ryanair victory at Cheltenham last month it will set the tone for the week in more ways than simply keeping the trainer’s title battle alive.

This is a horse that generates excitement among the National Hunt public like few others. Even the famously cool Ruby Walsh admits Un De Sceaux’s head-down-and-go style makes him that little bit different.

But from a betting value point of view it’s the English raider Fox Norton who appeals as a profitable party-pooper.

Logically there really should be nothing between these two horses in price terms. Both have indicated two miles is a minimum. Both are dropping back in trip. They have each defeated Sub Lieutenant on their last starts, and in fact Fox Norton beat that horse by further.

That was in the Melling Chase at Aintree, and after his narrow Champion Chase defeat at Cheltenham it means Fox Norton is taking in a third major festival in six weeks which is a gruelling challenge for any horse.

Crucially though it could be that the Colin Tizzard-trained star is more at home on ground that has required watering than Un De Sceaux. The latter would deserve to be odds-on if the going was soft but it is debatable if he should be in these conditions against a horse officially rated 2lb his superior.

Mullins has played down the importance of the going, and said: “We would prefer some ease in it, but I don’t think it’s a huge issue. I thought he won well at Cheltenham, and dropping back to two miles shouldn’t be any problem.”

And in itself it should not be. But a combination of this trip and this ground provides a similar niggling doubt to Fox Norton’s busy recent schedule, although Tizzard appears cautiously optimistic on that score.

It might be significant too that his Champion Chase effort came during a relative lull for the Tizzard team overall and yet Fox Norton still only just failed to Special Tiara. He looked much better at Aintree when the consensus seemed to be that he improved for the extra half mile.

But in these Punchestown circumstances of two miles on decent ground against Un Seceaux, the value option looks to be Fox Norton.

4.55: AdreamstillaliveMiles To Memphis – A few of the fancied runners like Tudor City and Veinard tend to finish weakly, which opens things up for a bet on a pair at bigger prices. Good ground is a concern for Adreamstillalive, but she thrived through the winter, winning with a bit in hand from another progressive type last time. Miles To Memphis has put together two good runs since joining Sneezy Foster, and looks on a good mark if its jumping holds up.

5.30: Sir Valentino – If Un De Sceaux is vulnerable, it is under these conditions of two miles on good ground in spring. Fox Norton has the form to go close, but this is a third quick run in a season interrupted by injury, and Sir Valentino is more overpriced in any case. Despite an excellent campaign, he remains under the radar, and should have beaten Champion Chaser Special Tiara at Christmas. It’s possible he needed it when too free at Cheltenham, and this easier track will suit better.

6.40: Disko – Disko has the best piece of three-mile form by dint of his third to Irish National winner Our Duke over Christmas, and backed that up with a dominant defeat of the same horse in the Flogas in February. He wasn’t seen to best effect in the JLT at Cheltenham, trapped wide in a race that emphasised speed, and this should test stamina more. His main rivals – Acapella Bourgeois and Anibale Fly – prefer softer ground.