Labaik’s start is key to Grade One clash with Melon 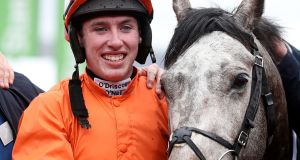 Jack Kennedy celebrates winning the Supreme Novices Hurdle at Cheltenham with Labaik. Will he “jump-off” at Punchestown? Photograph: INPHO/Dan Sheridan

The finish is invariably the most important part of any race, but when Labaik is involved no one’s going to miss the start either.

Punchestown’s festival will attract its share of rogues this week, but none more so than the Gordon Elliott-trained grey who proved lovable at least to those prepared to take a 25-1 chance at Cheltenham, although much less so to followers of Melon. Having beaten off everything else in the Supreme, Melon wound up trumped by a horse so enigmatic he makes the current White House incumbent seem boringly predictable.

Labaik brought to Cheltenham perhaps the most unimpressive CV ever seen at the festival having officially refused to race on four occasions. Prior to joining Elliott he even once stood in starting stalls and declined to move like the cigar-ad horse of old.

And it’s worth recalling he risked being banned from Cheltenham after only being persuaded to break into a gallop so late in a race at Naas in February that the rest of the field had long gone.

But whether it was Cheltenham’s atmosphere or some magic persuasion by his jockey Jack Kennedy, Labaik was on his best behaviour in the Supreme and duly showed the exceptional natural ability that Elliott has always maintained lurks underneath his range of psychological quirks.

Others close to the horse insist he is completely straightforward in every other regard bar the start, which, nevertheless, is inconvenient in a racehorse, and which assures that more than a trace of sulphur resonates around Labaik when he lines up in Tuesday’s Herald Champion Novice Hurdle.

Should he jump off and put his best foot forward Labaik’s Cheltenham form makes him favourite: but it’s just as likely he’ll plant his feet at the start and leave those taking short odds feeling cheated.

‘‘All we can do is hope he’s on another going day. He seems to be in great from,” Elliott said. “If he jumps off on terms he has a massive engine – but he has to jump off!”

Perhaps the sight of Melon, and maybe even Forge Meadow, who won that Naas race in February, will encourage Labaik into positive action again, but he looks a proposition best left to “in-running” players.

Melon in contrast looks admirably straightforward, progressing significantly from his maiden to run so well at Cheltenham, and he looks the safest option to get Willie Mullins off to a Grade 1 festival flyer this week.

The reigning champion trainer has seven runners in total on day one compared to Elliott’s 11, and should Labaik jump off and win it really would indicate the title-challenger’s name is on the championship.

Elliott won’t have Mullins to contend with in the third Grade One of the day, the Growise Champion Novice Chase, and on his best form A Toi Phil has a chance, especially on decent ground.

He is one of a squad of four representing Michael O’Leary’s Gigginstown Stud team, with Disko appearing to be a worthy number one pick.

This is a horse that has beaten Our Duke and run a fine race to Yorkhill in Cheltenham’s JLT. There is, however, a slightly question-mark over the three-mile trip with him, and in the circumstances Anibale Fly could be an option instead.

These ground conditions will be no problem to a horse who scored over hurdles at last year’s festival, and will be very different to what Anibale Fly encountered in his last start at Navan in February behind Acapella Bourgeois.

Sandra Hughes’s runner would be a very popular winner, but Tony Martin’s stable has shown a return to form in recent weeks and Anibale Fly’s Drinmore form behind Coney Island gives him a good shout.

Jamie Codd rides, and his duel with Patrick Mullins for the amateur jockey’s crown is another fascinating twist to this week’s action. In the circumstances, then, it’s noteworthy that Mullins has opted to ride the course winner Early Doors rather than his father’s newcomer.

The Mullins team have Pique Sous running for them in the handicap hurdle while Veinard looks the Elliott pick. Veinard ran a fine race at Newbury in February, and was running on well behind Thomas Hobson at Fairyhouse last week.  He doesn’t look to be hiding much from the handicapper though, and Roconga could be a very different proposition. The JP McManus runner hasn’t run over flights since winning on decent going at Killarney last summer, and is now almost a stone higher in the ratings for that.

However, Roconga is also now rated at 95 on the flat after a recent win at Cork, and looks a type who might only now be coming to his peak.