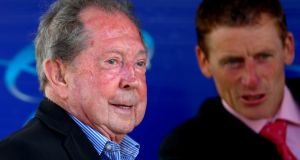 Former champion jockey Johnny Roe with Johnny Murtagh in 2016. He retired from riding in 1980, and trained in Macau before becoming a successful bloodstock agent. Photograph: INPHO/James Crombie

The death has taken place of the former nine-time Irish champion flat jockey Johnny Roe. He passed away on Sunday aged 79.

During an illustrious career in the saddle, Roe was employed as stable jockey to top trainers Vincent O’Brien and John Oxx snr. He also enjoyed a spell riding for Dermot Weld.

In 1967, he rode Pampalina to win the Irish Oaks for Oxx, and also enjoyed Curragh classic success on Royal Danseuse in the 1964 Irish 1,000 Guineas. In 1975, Roe won the English 1,000 Guineas at Newmarket on Nocturnal Spree.

Perhaps the best horse he rode to victory was the subsequent Derby winner Roberto in the 1971 National Stakes.

He was fondly remembered by John Oxx on Monday, who recalled many winners Roe partnered for his father.

“He was a very good stable jockey, a very good rider and a very decent fellah, Johnny. Himself and my father had a great relationship, and he rode winner after winner.

“Johnny would go all over the country in those days, looking for winners, and the roads were a lot different then. But he was always in the yard the following morning,” Oxx said.

Roe retired from riding in 1980, and subsequently trained in Macau before becoming a successful bloodstock agent.

Reposing at Thomas Murphy & Sons Funeral Home, Boghall Road, Bray, on Tuesday from 6pm to 8pm. Funeral Mass is on Wednesday at 10am in St Mary’s Church, Sandyford village, followed by burial in St Mochonog’s Cemetery, Kilmacanogue. No flowers by request. Any donations can be made to the Irish Injured Jockeys.