Ante-post favourite, Riders Onthe Storm, ruled out after being declared a non-runner by mistake 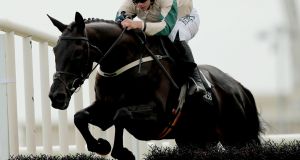 Robin Des Foret: will bid to bridge a 14-year gap since an Irish winner in the handicap feature at Cheltenham. Photograph: James Crombie/Inpho

Willie Mullins has his first Cheltenham runner of the season when Robin Des Foret tries to bridge a 14-year Irish gap in Saturday’s handicap feature.

The Caspian Caviar Gold Cup hasn’t been won by an Irish-trained horse under any of its sponsorship guises since Noel Meade’s Sir Oj in 2005.

However Mullins, the Cheltenham festival’s most successful ever trainer with 65 wins, is prepared to take a shot with Robin Des Foret although significantly jockey Paul Townend is staying at home for Fairyhouse’s six-race programme.

Instead teenager James Bowen – who memorably won the Welsh National as a 16-year-old on Raz De Maree almost two years ago – takes the mount on a horse that hasn’t run since chasing home his Irish National-winning stable companion Burrows Saint at Limerick in March.

The race itself might already have had its most dramatic incident after the ante-post favourite, Riders Onthe Storm, was ruled out on Friday after being declared a non-runner by mistake.

Trainer Nigel Twiston-Davies tried to rectify the error within seconds of it being made but the British Horseracing Authority was adamant the horse couldn’t run.

“Reversing a non-runner after it has been notified can lead to significant confusion and this is why it is written into the rules that a non-runner declaration cannot be withdrawn,” it said in a statement.

It was an embarrassing blunder by the Twiston-Davies operation which the trainer later reported was due to an error of communication with his secretary.

He said he asked her to take out a runner at Bangor but she misheard the name and took out Riders Onthe Storm instead.

“We tried to put him back in within 30 seconds but rules are rules and we couldn’t,” he said.

Many bookmakers subsequently voided bets made on the horse for the big race.

Mullins is four short of a century of winners already this season in Ireland but is comparatively light on runners this weekend.

He has four declarations for Navan on Sunday and just two at Fairyhouse which has been reduced to a six-race programme due to the steeplechase track being unraceable.

Some Might Say should improve for her Naas debut last month but could still find Joseph O’Brien’s newcomer Castra Vetera too good in Saturday’s bumper.

In contrast Monkfish looks the one to beat in an earlier maiden hurdle where Faugheen’s half brother Osmotic appears to be his main danger.

Monkfish has had to settle for second in his two starts for Mullins but Diol Ker, who beat him last time, looks a decent prospect and a stretch out in trip should suit.

Gordon Elliott is much busier this weekend with 17 intended runners on Sunday and 11 at Fairyhouse. Having already passed the century of winners in Ireland this term, Elliott gives a new recruit Robin Deuz Pois his first start in Ireland in the first leg of a handicap hurdle.

Robin Deux Pois failed to win in 13 starts for Paul Webber in Britain but it’s interesting Elliott is persevering with a 90-rated animal that hasn’t had a race since last February.