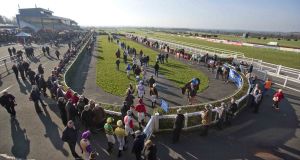 Navan Racecourse: Sunday’s schedule will see Navan share the RTV spotlight with Carlisle and there are ten minutes gaps between the two meetings. Photograph: Morgan Treacy/Inpho

The resounding Conservative Party victory in Thursday’s UK general election has been described as a positive outcome for Irish racing.

With the sport and industry here still nervous about the potential implications of Brexit, Horse Racing Ireland’s chief executive said on Friday that Boris Johnson’s election victory does at least provide some clarity.

“Under no circumstances is Brexit a positive for us. But if you accept the inevitability of it happening, the fact there was a decisive result, and the withdrawal agreement as was thrashed out will go through, that’s probably a positive,” said Brian Kavanagh on Friday.

“It does mean the UK will leave the EU on January 31st and there will be a transition period where the current arrangements will stand which buys a bit of time.

“Within the withdrawal agreement there’s the idea of a border down the Irish Sea so the movement of horses across the Border on the island of Ireland should be unaffected,” he added.

The next fixture north of the border is Down Royal’s traditional date on St Stephen’s Day, the busiest fixture list of the year in Ireland with meetings also taking place in Leopardstown and Limerick.

After last weekend’s controversy over race clashes on the Racing TV subscription channel – labelled a “disaster” by top trainer Noel Meade – fears were expressed for coverage of Irish racing on an exceptionally busy schedule in Britain and Ireland on December 26th.

On Friday, Kavanagh welcomed a statement from Racing TV that the three Irish dates will have their own digital platform on St Stephen’s Day as well as featuring on the main channel.

RTV will cover eight meetings overall in around four hours on St Stephen’s Day but said Irish coverage will be available on its own via the RTV website and apps.

“It’s an interesting one. The idea of a separate gallery is worth exploring further. It means Down Royal will be shown on TV for the first time on St Stephen’s Day. In the past it has lost out so that’s a bit of a breakthrough,” Brian Kavanagh said.

The HRI boss defended the media rights deal which saw RTV take over day to day broadcasting of Irish racing from the Attheraces channel at the start of this year. He stressed that that direct to home broadcasting is just one element of the deal.

RTV has reported that it has 13,000 Irish subscribers and Kavanagh rejected claims that Irish racing’s profile has slipped under the new arrangement.

“I don’t accept that. The viewing figures speak for themselves. Racing TV have put out figures and they compare on a par with viewing figures for previous channels,” he said.

“I didn’t see last Sunday but I understand there was a sequence of events, which happens, that meant Punchestown went off 12 or 13 minutes late.

“The races weren’t scheduled to clash but they did and they [RTV] followed protocol in that they gave commentary on the race scheduled to finish first.

“They’ve done that in reverse. I’ve seen handicap hurdles in Navan finish while a Group race in the UK is on a split-screen,” he added.

Sunday’s schedule will see Navan share the RTV spotlight with Carlisle and there are ten minutes gaps between the two meetings.

The switch of a handicap chase from Fairyhouse means an ultra-early 11.30 start at Navan which features a four-runner Grade Two.

Gordon Elliott’s novice team have been carrying all before them and Andy Dufresne will be expected to continue that in the Navan Novice Hurdle.

JP McManus’s expensive purchase impressed on his hurdling debut over the course and distance last month and looks to have Latest Exhibition, the mount of Bryan Cooper, as his main opponent.

Elliott has won the Listed Future Champions Bumper for the last four years, including last season with Envoi Allen and Samcro in 2017.

His candidate this time is Pencilfulloflead who impressed on his Down Royal debut and has since been bought by owner Brian Acheson’s Robcour operation.

There are four other winners in the race and a newcomer in Buck Rogers who is a half brother to no less than Elliott’s ill-fated Cheltenham bumper champion Fayonagh.

Unusually Willie Mullins isn’t represented in either of the black-type events but he could still enjoy a productive Sunday.

Et Dite, a dual bumper winner in France two years ago, finished only fourth on her Irish debut but should be considerably sharper for that in one maiden hurdle while Blackbow is hard to oppose in another.

Mullins has two in the €50,000 Tara Handicap Hurdle and the 2018 Triumph Hurdle third Sayo looks an interesting contender.

Having won over fences his jumping seemed to worsen in subsequent races so he’s being given another shot over the smaller obstacles.

In other news the 2018 Cheltenham Gold Cup hero Native River is set to bypass potential Christmas dates and wait instead to race in the New Year.

The King George VI Chase and the Welsh National had been options for the Colin Tizzard-trained star.

Tizzard’s son Joe reported on Friday: “I think Elegant Escape will be our one runner in the Coral Welsh Grand National.

“Garth and Anne Broom [owners] are keen for Native River to go to the Gold Cup reasonably fresh so we’ll likely target the Cotswold Chase or the Denman Chase for him. He’ll just have the one run and we’ll have a real good crack at the Gold Cup again.”

10-man Arsenal show their heart to rescue a point at Chelsea 22:23
Aston Villa strike at the death to pull clear of the drop zone 21:58
Sergio Agüero sees City past resilient Sheffield United 21:39
Talk of Celtic’s title demise is ‘very premature’, says Lennon 20:18
José Mourinho feels Troy Parrott isn’t ready to step up yet 18:07
Here is your handy guide to sport on television this week