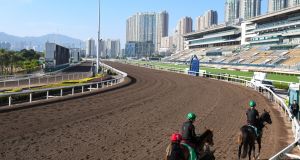 Aidan O’Brien’s international star Magic Wand is likely to be on her travels once again in the New Year after a gallant losing effort in Hong Kong on Sunday morning.

On her 12th start of 2019, Magic Wand couldn’t secure a clear run at a vital stage of the Longines International Cup but still only just failed to haul back the winner Win Bright.

The latter was one of three Japanese winners on the International Carnival programme, the trio also including Glory Vase in the 1½-mile Vase.

O’Brien’s Derby winner Anthony Van Dyck failed to fire in the Vase but Ireland’s champion trainer confirmed the colt will continue his racing career in 2020.

So too will Magic Wand who began 2019 by finishing runner-up in the $7 million (€6.3m) Pegasus Turf at Gulfstream Park last January and she could return to Florida for another crack at that race next month.

O’Brien told media in Hong Kong that an alternative option may be a valuable race in Saudi Arabia in February.

He was full of praise however for a mare who ran in the US on three occasions earlier this year as well as travelling to Dubai and competing in three races in Australia before venturing on to Hong Kong.

“She just loves racing and loves travelling. You could see how relaxed and calm she was today. Nothing fazes her,” he reported. “She loves racing so will be kept on the go. She has a choice of the Pegasus in Florida at the end of January or she could go to Saudi Arabia in February.”

The other Irish runner on Sunday’s card, the Willie Mullins-trained True Self, finished seventh in the Vase.