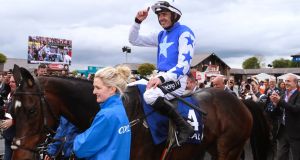 In the world Ruby Walsh inhabited until a few weeks before his 40th birthday earlier this year, he had become a rock star of risk taking. But he never saw it that way. In the end days he may have made the calculation more often than at the beginning. But for years the only thing that really mattered was driving in the fast lane.

A jockey’s world is calculated and safety driven. Horses aside, the riders, largely young men and a growing cohort of women, are also an unknown factor. Young and cavalier, they are not risk averse.

Sometimes it takes someone like Walsh and his challenging, home spun observations to set out contradictions in plain language. In his career he was knocked unconscious four times. But when he looks back at himself as a jockey on the rise, all he can see is a young man blind with ambition. That self he now recognises in others.

In Dublin to present a cheque of €50,000 on behalf of the Irish Injured Jockey’s fund for collaborative research to explore the effects of long term concussion, his is a pragmatic, willfully candid view of head trauma.

“I’m still not certain about how you ‘catch’ people for want of a better way of putting it,” he says. “Detecting it? Don’t know what the word is. I know as a jockey to the day I retired, I would have ducked it, hidden it, gotten away with it. I wanted to go riding the next day.”

Walsh has been part of the locker room for too long to speak the honeyed words of the board room. There is a no-schtick imperative to help. But his close up view can’t be dishonest. Young riders are, well, young.

“You couldn’t have talked to me at that age. I’d have tried anything and did anything to avoid it,” he says. “So I could say to you lads if you feel dizzy and you know when you stand up and you’re thinking ‘I fell a second ago and yet the horses are 12 seconds away, so where did those 11 seconds go? ’

“I can advise people to do that. But competitive sports people aren’t going to listen to me. I know I wouldn’t have listened to me and that’s the thing. I said this at a seminar three years ago. It’s going to be so hard to catch the people who don’t want to be caught.”

In racing if you are knocked out it’s a three week step down. For lesser head injuries it’s a few days or a week. Because of the way the sport works, a jockey stepping down for three weeks is not the same as a rugby player, who may miss matches but not the pay cheque.

“Because the recovery was always so structured in racing and a bang was seven days, you be thinking ‘ugh that’s tomorrow and that’s Tuesday and that’s Thursday.’ Then if you were knocked out that’s 21 days. Jesus, what’s on the next three weeks.

Walsh rode 2,756 winners in his career. More than 200 of those were Grade One winners. He is the winning-most jockey at the Cheltenham Festival, retiring with a record 59 and rode a record seven winners on two occasions.

He was crowned champion National Hunt jockey in Ireland for the 12th and final time at the end of the 2016-2017 season with 131 winners, a tally that matched his previous best, a record he set in 2007-2008. That talented. But he fell often.

He praises horse racing for being the first to take the concussion seriously, not always ahead of it but always aware of it.

“Ruby has been peeled off the ground I don’t know how many times and he’s still the brightest person you could meet,” says Dr Adrian McGoldrick talking about, what this all is, risk assessment.

And he’s another man who knows what he is talking about.

1 Owen Doyle: Creeping professionalism of schools rugby a threat to the game
2 GAA officials and referees brace themselves as new rules kick in, and this time it's for real
3 Niall Quinn happy to step into the breach at FAI
4 Scotland’s Finn Russell missed training after Sunday drinking session
5 Coco Gauff pulls off biggest shock yet by beating Naomi Osaka
Real news has value SUBSCRIBE

Ole Gunnar Solskjær insists he is up to the challenge at United 11:40
Rugby under threat; Niall Quinn steps into FAI breach 07:33
Serena Williams’ Australian Open hopes ended by Wang Qiang 08:15
Coco Gauff pulls off biggest shock yet by beating Naomi Osaka 06:41
Cox calls for a more relaxed transfer regime in the GAA 06:51
Here is your handy guide to sport on television this week