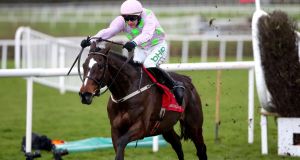 Min’s win in the John Durkan Chase was shown on a split screen on Racing TV. Photograph: Bryan Keane/Inpho

The deal, which saw Racing TV take over day to day coverage of the sport here from Sky Sports Racing at the start of the year, is again under the spotlight after Sunday’s John Durkan Chase at Punchestown wound up broadcast on a split-screen and with no commentary in the early stages.

Donoghue, a stalwart of Gordon Elliott’s team, and regular rider of the dual-Grand National hero, Tiger Roll, expressed his frustration in a sponsored blog on Monday.

“Giving the coverage of Irish Racing to Racing TV is a decision I really am struggling to understand, and each passing day it’s confusing me even more.

“This isn’t about yesterday at Punchestown either, there’s nothing anybody could do about that clash unfortunately.

“It’s just frustrating me how Irish Racing is now playing second fiddle to racing in the UK.

“If there’s a clash between a race at even one of our big meetings, and any sort of a race in the UK, our race is treated like the lesser event.

“When I went to analyse my performance on the replay of the John Durkan yesterday, even that was on a split screen! You have to go deeper into the app to get the full race and that’s not good enough,” he told bookmakers.co.uk.

“Long term this will affect racing here also. I was a big fan of At The Races (now Sky Sports Racing) when they had Irish racing, as they made it their premier product and made a serious effort on their coverage.

“Most importantly, it was free with your Sky subscription and the importance of that can’t be underplayed.”

“The fact it was free meant that ordinary people would flick the channel on every now and then - this can only be a help to the sport in general.

“I’d be out and about, and local people with a small interest would stop me to mention a horse from a previous day as they were able to watch it.

“Now, they have to pay more money to do so and most people don’t have the budget to pay another subscription fee to watch horse racing,” he added.