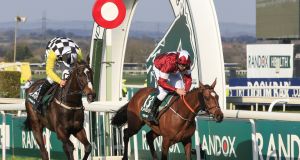 Tiger Roll ridden by Davy Russell wins the first of his Grand National victories in 2018 from Pleasant Company. Photograph: Conor Molloy/Action Plus via Getty Images)

Michael O’Leary’s Gigginstown Stud team has stressed the Ryanair boss will pull the plug on a historic Aintree Grand National hat-trick bid by Tiger Roll unless the horse is “given a chance” by the British handicapper next week.

No horse has ever won the world’s most famous steeplechase three years in a row although Tiger Roll is a clear 6-1 favourite to manage a feat sure to command worldwide attention.

However whether or not the little horse that has inherited the legendary Red Rum’s role as a Grand National icon even lines up at Liverpool could be determined next Tuesday when the weights for the big race are released.

Tiger Roll is sure to be asked to carry topweight of 11.10 in the handicap event

But crucial to Tiger Roll’s participation is how the British Horseracing Authority handicapper exercises the long-established ‘compression’ policy which is in place to tempt more high-class horses into the race.

Its net effect is to allow the best, and therefore highest rated horses, to concede less weight to their rivals.

Last year the original topweight, Bristol De Mai, who had an official BHA rating of 173 had his National mark compressed by 5lbs to 168.

It wasn’t long after Tiger Roll beat Magic Of Light to win his second National last year that O’Leary started pouring cold water on talk of a hat-trick, suggesting there would be a welfare issue about asking the diminutive star to run off his official BHA rating of 172.

In November the businessman said he didn’t give “a shite about history” and described Tiger Roll’s chances of lining up in Liverpool as “slim to none”.

It means intense focus will be on the BHA handicapper Martin Greenwood when he reveals his National weights in Liverpool next Tuesday, especially the mark he gives Tiger Roll compared to his official rating.

Eddie O’Leary, brother of the owner, and Gigginstown spokesman, said on Tuesday that he has a figure in mind that will allow Tiger Roll run but wasn’t prepared to reveal it.

“It’s in my head because whatever I say he won’t give it,” said O’Leary who has had high-profile disagreements with the British handicap authorities in the past.

Even though expectation around Tiger Roll and a potential historic National hat-trick is unprecedented, O’Leary underlined how that won’t affect his brother’s decision.

Instead he indicated that if the businessman is unhappy with the mark allocated to Tiger Roll next week then the horse will be retired after running in Cheltenham’s Cross-Country Chase.

“He’ll have to compress him some bit or this horse won’t run. You know Mick, and they’ll only get one chance.

“Racing wants him, we want him, Aintree wants him, everyone wants him. But unless he’s given a chance he will not run. They have one chance to treat the horse fairly,” Eddie O’Leary said.

Gigginstown’s latest Gold Cup contender, Delta Work, has been raised 2lbs to 171 for his Grade One victory at Leopardstown on Sunday, something O’Leary has pounced on to back up his argument.

“He’s still a pound behind Tiger Roll. That 172 is way too high. It’s a false rating. Tiger Roll is a great, tough horse but not for ratings, not for class.

“He was given a 12lbs rise for winning the Cross-Country when no horse was rated within 20lbs of him. That was a reaction to the way he won the Boyne Hurdle (2019) which is unfair.

“They have him on the rating of a Gold Cup winner and you wouldn’t consider running him in the Gold Cup.

O’Leary has pointed to instances in the past of when National topweights have been compressed by up to 10lbs although significantly the average in recent years has been just 2.5lbs.

How that tallies with the figure in his head remains to be seen but the unhappiness of both O’Learys with Tiger Roll’s BHA rating is clear.

“You have to give the horse a chance. We know he’ll be topweight. We understand he’ll be 11.10 – no problem. But it’s about compression. If he’s stuck out there on his own we certainly won’t run.

“They have one chance and that’s it. You can’t go back on it. If he’s not given a chance the Cross-Country [at Cheltenham] will be his last race and he’ll be retired then. I hope they give him a chance,” Eddie O’Leary added.

Tiger Roll’s preparations were interrupted by an operation to have a chip removed from a leg joint in November but he is set to make his long-awaited return to action in Navan’s Boyne Hurdle on Sunday week.

The ten year old won that race last year on-route to a second Cross-Country at Cheltenham – and a fourth career festival victory – before becoming the first horse since Red Rum to successfully defend the National crown.