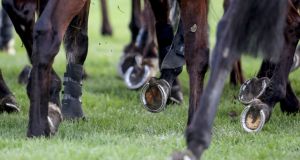 Meath trainer David Dunne has had his licence suspended for four months.

It follows an appeal by Dunne against the severity of a €2,000 fine imposed on him in November after one of his horses, Druim Samhraidh, tested positive for an anabolic steroid at Ballinrobe in August. He was also ordered to pay €1,000 in costs on that occasion.

At that hearing, held in the headquarters of the Irish Horseracing Regulatory Board, the horse was disqualified and banned from racing for 14 months by a Referrals Committee panel chaired by Mr Justice Tony Hunt.

Dunne appealed on Thursday and although his fine was reduced to €1,000, the appeals body chaired by Ms Justice Leonie Reynolds concluded the original penalty on Dunne was unduly lenient. They suspended Dunne’s licence for four months, beginning on March 1st. The horse’s ban stands.

Dunne, who saddled a 100-1 winner, Department Of War, at Down Royal on Tuesday, couldn’t be contacted for comment on Friday.

He is the first trainer to be suspended by Ireland’s racing authorities since 2015 when Co Galway-based Ger Lynch had his licence removed for three months after falsifying vaccination paperwork.

In 2017 a three-year-ban imposed on Co Armagh-based Stephen McConville by the British Horseracing Authority was reciprocated by the regulator here.

In submissions on Thursday, Dunne’s solicitor accepted the seriousness of the case and stated the appeal was based on the financial situation of his client. In light of the costs and reputational damage incurred by Dunne he appealed for some leniency of the fine.

However, the appeals body were satisfied the sanctions imposed by the Referrals Committee were unduly lenient.

They came to that conclusion “owing to the seriousness of Druim Samhraidh being exposed to Boldenone, which is an anabolic steroid and a prohibited at all times substance, between eight and 48 hours or 12 and 16 days prior to the race in question, when in the care of David Dunne.”

At November’s Referrals hearing it was revealed an unannounced inspection took place at Dunne’s yard near Ratoath 18 days after Druin Samhraidh won at Ballinrobe, following which he tested positive for Boldenone.

Druim Samhraidh was the only of nine horses to test positive for the anabolic steroid at that unannounced inspection by IHRB officials. Boldenone was found in the horse’s blood, urine and hair samples.

At November’s hearing Dunne could offer no explanation for how the horse was exposed to Boldenone “other than to suggest that he may have been first exposed to the substance prior to him getting the horse to train”.