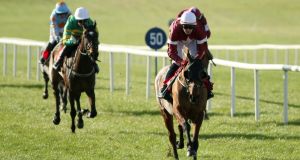 Tiger Roll is on target to run in the Boyne Hurdle at Navan on February 16th, after resuming full work following his setback.

The dual Grand National winner — who will bid for a fifth Cheltenham Festival win in March before his quest to join Red Rum in the history books with a third victory at Aintree in April — had surgery to remove a chip in a joint in November.

Gordon Elliott told Sky Sports Racing: “He did his first bit of work on Saturday after his setback and he worked well. He’ll work again during the week.

“My plan is to run on Sunday week in the Boyne Hurdle — he won’t be as fit as he was last year and will come on a lot for the run, but it will be a lovely stepping stone to the cross-country (at Cheltenham).

“He missed a month, so he’s by no means as fit as he was when he won it last year. Hopefully it will put him spot on for Cheltenham.”

It was a mixed weekend for Elliott at Leopardstown, but he did win the feature race, the Irish Gold Cup, with Delta Work.

“He was very good, Jack (Kennedy) gave him a wonderful ride. He stays well, but probably doesn’t want to be in front too soon,” said Elliott.

“I’d say the Gold Cup trip will be made for him, he stays really well. We probably made a mistake last year not running between Christmas and Cheltenham, as he was a bit fresh. He’s a better horse when he’s running.”

Unfortunately for Kennedy he was unshipped in the following race from Dallas Des Pictons and suffered a broken leg.

Elliott said: “It’s very unfortunate for Jack, he’s a top-class jockey, but he’s got youth on his side and a lot of good horses to come back and ride so he’ll be OK.”

One of the disappointments of the meeting was Battleoverdoyen, who was beaten when falling at the last in the Flogas Novice Chase won by Faugheen.

“He’s a bit sore, so we’ll have to see how he is, but Faugheen was amazing,” Elliott went on.

“He was well beat at the time — I’m a realist, on the day it didn’t work out, but he’s very sore so hopefully he’s OK.”

One of Elliott’s stars who did not run at the weekend was Envoi Allen, and the trainer suggested the Ballymore Novices’ Hurdle will be his destination next month.

“We toyed with running him but he’s had three runs, won two Grade Ones and we had nothing to gain and everything to lose so he’ll go straight there (Cheltenham),” said Elliott.

“Nearly every second race at Leopardstown his form tied in, so it’s rock solid.

“If I had to say right now which race, I’d have the Ballymore in my head unless the ground is very soft.

“A lot of people are talking about the Champion Hurdle, but I’m a big believer in keeping them in the races I think they can win and at the moment I think that’s the Ballymore.”