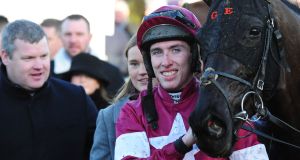 Jack Kennedy will miss Cheltenham after breaking his leg at Leopardstown. Photograph: PA

Jack Kennedy is expected to leave hospital on Tuesday after undergoing surgery on the broken leg he sustained at Leopardstown on Sunday.

The Irish Horseracing Regulatory Board has confirmed the 20-year-old jockey will miss next month’s Cheltenham Festival.

Kennedy fractured his right femur after being unseated from Dallas Des Pictons at the first fence in a handicap chase which followed his Irish Gold Cup triumph on Delta Work.

“Jack has had surgery on his leg this morning and thankfully that went well. Unfortunately at this stage the timing will mean Jack will miss Cheltenham.

“Hopefully he should get home from hospital tomorrow,” reported the IHRB medical officer, Dr Jennifer Pugh.

It is another major injury blow to Kennedy who has suffered four leg fractures during his short but spectacular career to date.