Tiger Roll on course to bid for Grand National history 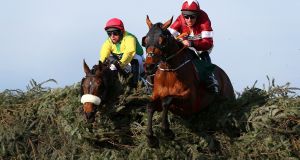 Tiger Roll is the headline act among 105 entries for the £1 million Randox Health Grand National.

Gordon Elliott’s charge became the first horse since Red Rum to win back-to-back renewals of the Aintree spectacular last season. The Gigginstown House Stud-owned 10-year-old is the 7-1 favourite with Betway to emulate Ginger McCain’s legendary stayer by claiming the world’s richest jumps race for a third time on April 4th.

Elliott has made a total of 18 entries, more than any other trainer. If successful for a fourth time the Cullentra handler would become the joint most successful trainer in Grand National history, alongside McCain and Fred Rimell.

There were two previous Cheltenham Gold Cup winners in the mix in Colin Tizzard’s Native River and the Jessica Harrington-trained Sizing John. However, the latter was later scratched after suffering a season-ending injury.

Harrington also entered last year’s runner-up Magic Of Light – bidding to become the first mare to win the Grand National since Nickel Coin in 1951 – while Lucinda Russell’s 2017 National hero One For Arthur could bid to regain his crown.

The latter was an impressive winner of this month’s Peter Marsh Chase at Haydock, and while connections were cool on a return to Aintree in the immediate aftermath, he has been entered.

Vntage Clouds fell at the first in last year’s National, and was pulled up in the Becher Chase over the famous fences last month.

Sue Smith, who tasted Grand National success in 2013 with Auroras Encore, said: “After consideration we have decided to enter Vintage Clouds for the Grand National.

“Having discussed it at length with Trevor [Hemmings, owner], we decided that having won so well in the Peter Marsh, it was worth keeping our options open until nearer the time.

“He has slightly struggled over the Aintree fences, particularly in the Becher, but we want to keep all options on the table for the time being. He jumped superbly in the Peter Marsh, and has come out of the race very well.”

Other high-profile entries include the Paul Nicholls-trained Give Me A Copper, who is part-owned by former Manchester United manager Sir Alex Ferguson, and Christian Williams’ Welsh National winner Potters Corner, who counts Wales rugby union international Jonathan Davies among his owners.

The weights for the Grand National will be unveiled before an invited audience at St George’s Hall in Liverpool on February 11th.