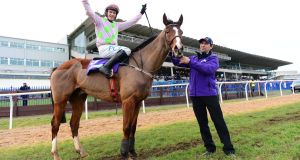 Faugheen and Paul Townend with groom John Codd celebrate after the Flogas Novice Chase during day two of the Dublin Racing Festival at Leopardstown on Sunday. Photograph: PA Wire

The piece of history Faugheen secured at Leopardstown on Sunday was greeted with a fervour that confirmed how “the Machine” has secured a singular place in the hearts of Ireland’s racing public.

Willie Mullins’s veteran brought the house down when breaking the mould with a Grade One success at the age of 12 in a top-flight novice event, the €150,000 Flogas Novice Chase.

In the process Faugheen led home a stunning sweep of the first four places for his trainer.

Easy Game, half the age of his illustrious stable companion, came within half a length of proving himself a peerless spoilsport, but the Dublin Racing Festival ultimately got the fairytale outcome it so desired.

Top-class chases have been won by 12-year-old stars such as Florida Pearl and Sizing Europe in the past, but this was different.

Having confirmed himself one of the finest hurdlers seen in modern times, Faugheen’s career was interrupted by long-term injury that meant his pomp looked well in the past.

When he got pulled up with an irregular heartbeat at Aintree last April it looked to many a perfect cue for the curtains to be drawn on an illustrious career.

Yet again Mullins opted to follow his own instincts and instead a long-held desire to run a horse he bought off the point-to-point fields over fences was fulfilled.

The switch to the bigger obstacles appears to have rejuvenated the old-stager who is now unbeaten in three starts and proved his credential as a dual-Grade One steeplechase winner.

The reception he’s got is unbelievable. He’s a trier. People like him. He tries all the time

Certainly a narrative of the old hero coming back for a final hurrah against rivals half his age has grabbed the public imagination.

For once the wave of happiness that swept over Leopardstown on Sunday had little to do with a 13-8 joint favourite emerging on top.

Instead the way crowds rushed to the parade ring, and roared their approval for Faugheen long before he made it back to the winners’ enclosure, recalled the days of former popular stars such as Hurricane Fly and Danoli.

“The reception he’s got is unbelievable,” said Faugheen’s owner Rich Ricci. “He’s a trier. People like him. He tries all the time. It’s what National Hunt is all about.”

Bookmakers cut Faugheen’s price to 6-1 about an ultimate return to former glories in the Marsh Chase – formerly the JLT – at next month’s Cheltenham festival.

That would be five years after he memorably secured Champion Hurdle glory under Ruby Walsh.

Those decisions remain to the made, however, and if Mullins’s suggestion that this might have been Faugheen’s “Gold Cup” proves correct, then it was a memorable one.

“This is fantastic, probably one of the most special winners I’ve ever had,” said the champion trainer, who landed another Grade One on Sunday, the Chanelle Hurdle, with the 4-1 shot, Asterion Forlonge.

“I thought our other horse was going to beat him coming up the stands rail, which is probably better ground, but he dug deep.

“To come back at his age and do it on the number one stage here at the biggest festival – to me that’s fantastic.

“People want to retire horses at 10, 11 or 12 but to me they have plenty of life in them if they haven’t used up the mileage as younger horses. They can go much longer than people think and he’s the living proof of it.

“He’s got stamina, he’s got speed, he can jump. He’s got the whole package as well, a bit like Un De Sceaux. They both want to train and get at the job and you are really trying to not let them do too much. They have a huge attitude to racing and training.

“I would have been gutted if he was beaten today,” Mullins added.

Mullins wouldn’t have been alone in that but, happily, a remarkably durable talent ensured we’ll never know.

1 ‘Manchester United are lucky to have you’: Klopp responds to Donegal schoolboy’s letter
2 Liam Toland: Larmour can distract England while others flourish
3 England name Jonathan Joseph on the left wing
4 This month a decade ago, football and Dublin changed course
5 Six Nations: Ireland v England all you need to know guide
Real news has value SUBSCRIBE