Company renews current deal for another two years until 2021 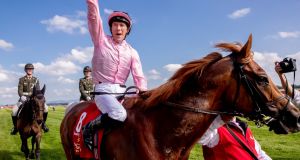 The company took over sponsorship of the Derby programme in 2008 and this year the Derby will have a boosted prize-fund of €2.25 million.

“We are happy to renew our sponsorship for another two years including this year and 2021,” confirmed Dubai Duty Free’s chief executive, Colm McLoughlin, on Tuesday.

It is good news for the Curragh which endured a torrid 2019 when its revamped €81 million facility, including the Aga Khan Stand, received heavy criticism at times.

Even though McLoughlin had predicted a crowd of more than 20,000, less than 12,000 people attended Derby day.

Nevertheless parts of the redeveloped facility were stretched to cope with long queues for toilets, as well as food and drink, on the ground floor of the new stand.

Crowd figures weren’t helped by an All-Ireland senior football qualifier between Kildare and Tyrone taking place in nearby Newbridge. The throw-in there took place 20 minutes before the Derby.

This year’s Derby will be run on Saturday, June 27th, the middle leg of a three-day festival.

“The 2017 Dubai Duty Free Irish Derby was the highest rated race in the world and our objective is to ensure we attract the very best three year old horses in Europe,” said the Curragh CEO Pat Keogh.

Last year’s Derby was won by the 33-1 outsider Sovereign, the longest-priced winner for 46 years, who led home an Aidan O’Brien clean sweep. It was the champion trainer’s 13th win in the race.

In other news the promising young horse Cedarwood Road could earn himself a ticket to the Cheltenham festival at Punchestown on Sunday.

The impressive maiden winner at Leopardstown over Christmas is one of 11 entries left in a Listed Hurdle.

His young trainer Gearóid O’Loughlin runs owner Chris Jones’s pre-training base near Dunsany in Meath and has kept open the option of Cheltenham’s Supreme Novices Hurdle next month for Cedarwood Road.

“For us it’s great to have a horse like him in the yard. It’s what you get up for in the morning and there’s a great buzz around the yard at the moment as he’s a horse we really like.

“This is going to be a step in class for him but we’re really looking forward to running him,” said O’Loughlin.

The Troytown fourth failed to fire in the Welsh National last time but O’Loughlin explained: “He didn’t travel over that well to Chepstow so we’re happy to put a line through that Welsh National run.”

Gordon Elliott has eight of the 23 left in the marathon handicap including the Paddy Power Chase winner Roaring Bull.