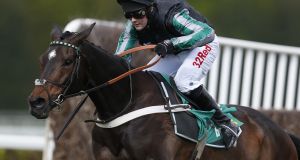 Altior is set to return to action at Newbury on Saturday. Photograph: Alan Crowhurst/Getty

Cross-channel trainers mostly ignored the riches on offer at the Dublin Racing Festival and their Irish counterparts have returned the favour with Willie Mullins’s Ciel De Neige the only potential raider for this Saturday’s big handicap prize at Newbury.

The JP McManus owned maiden is the sole Irish interest remaining among the 30 entries left in the Betfair Hurdle which is worth £155,000 in total.

Despite being winless in half a dozen starts to date - including getting beaten as a 1-4 favourite in a Limerick maiden over Christmas - Ciel De Neige is a general 12-1 shot in betting for the traditional big betting heat.

It’s 15 years since the last Irish based horse won with Essex scoring for the late Michael O’Brien under Barry Geraghty. Mullins has never won it although McManus was successful in 2013 with the top-class My Tent Or Yours.

Prior to his unlucky-in-running defeat at Limerick Ciel De Neige had run fourth to another McManus horse, Janidil, in a handicap at Fairyhouse’s Winter Festival.

However the Irish horse’s chance could improve since the long-time ante-post favourite Not So Sleepy is not a certain runner according to his trainer Hughie Morrison. He may instead wait for the Champion Hurdle at Cheltenham.

“He has got to school well on Tuesday or we might not run him. We have always been a possible or probable and I’ve tried to be fairly open like that. Everything needs to be right and if there is any doubt we will wait for Cheltenham.

“He is a horse that can give a negative quite easily. If Cheltenham was not down the road we would not be having this discussion. He will go to Cheltenham if he is in one piece and in reasonable form, regardless of what happens on Saturday,” Morrison reported.

John Queally is another Irish trainer tempted by Newbury’s big race card although it means his talented horse Djingle could end up taking on Altior in the Grade Two Game Spirit Chase. Joseph O’Brien has also left High Sparrow in a handicap hurdle on the Newbury programme.

Altior’s only defeat in 20 starts over jumps came at Ascot in November in a memorable duel with Cyrname when the reigning two-mile champion was stretched in distance for his first start of the season.

“Altior has to prove himself again and I think he can. He’s been beaten once in a two mile-five race in a bog when he wasn’t half ready for it. That doesn’t mean he’s old. He got beaten. It was going to happen and that was the day. He had a very hard race and he was very tired.

“It wasn’t stamina because he didn’t finish any further behind the winner than he was two out. He wasn’t straight enough and the ground was horrible. It’s going to be a decent race on Saturday. There are ten in there so they’re not frightened of him,” said Altior’s trainer Nicky Henderson on Monday.

1 Nicholas Quinn: ‘Swimming became how I dealt with grief’
2 A beautiful, happy accident - Moneyball is the best sports movie ever
3 Is it time for the New England Patriots to tear it down and start again?
4 Ian McKinley: ‘You do take for granted the simple things in life’
5 Tokyo Olympics likely to start on July 23rd 2021, reports
Real news has value SUBSCRIBE