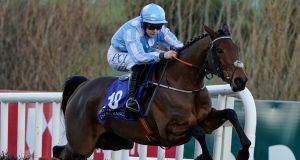 Honeysuckle is to the forefront of most ante-post lists for next month’s Unibet Champion Hurdle, but a decision on whether or not she lines up in the Cheltenham festival’s opening day highlight is being kept on the long finger.

Honeysuckle stretched her unbeaten record to seven when landing Saturday’s Irish Champion Hurdle at Leopardstown in a performance that seemed to divide opinion.

After looking like she was going to win the €200,000 highlight with authority on the run to the last, a clumsy leap at the final obstacle suddenly left the door open for her rivals. It meant Henry De Bromhead’s star had to fight out a close finish to ultimately hold off Darver Star by half a length, with her stable companion Petit Mouchoir a similar margin back in third.

The bare form has been questioned but considering it was just Honeysuckle’s second start at two miles, and her first time going left-handed on a racecourse, it was a performance that put her to the forefront of the mix for the Champion Hurdle at Cheltenham.

Honeysuckle is a general 6-1 shot for one of the most open championships in recent years, with the JP McManus-owned Epatante topping most betting lists.

Whether Irish racing’s latest star mare even lines up in the race isn’t clear however. Her original festival target was the OLBG Mares Hurdle, although that could mean a clash with the outstanding Beine Des Deux.

In fact the fluid nature of the big race outlook for both star Irish mares is underlined by how the Stayers is one alternative for “Benie”, and owner Rich Ricci has also dropped into the mix a possible supplementary entry into the Champion Hurdle itself.

Paddy Power has opened a market on which races the pair will line up in with Honeysuckle odds on (8-15) for the Champion Hurdle, while Benie Des Dieux is 2-5 to try to regain the OLBG crown she won in 2018.

However, other firms have slashed Benie Des Dieux to joint favourite for the Champion Hurdle with Epatante.

In the circumstances it’s no surprise De Bromhead is in no rush to commit himself to plans for Honeysuckle, who has emerged in good shape from her weekend exertions at the Dublin Racing Festival.

“She’s in both races [at Cheltenham] and we haven’t really gone through it. I would imagine we won’t make up our minds until much nearer the time,” he said on Monday.

If some observers were left underwhelmed on Saturday, then De Bromhead was left mulling on the positives.

“We’re very happy anyway. It was a savage performance, first time back over two miles on yielding ground; it’s the fastest she’s ever had to race and jump. I thought it was really good.

“Obviously she was a bit lonely at the last and she didn’t jump it great. That made it a little bit harder again for her. But all in all it was an Irish Champion Hurdle and the fact she’s won is brilliant.”

The Co Waterford trainer initiated a Grade One double on Saturday when Notebook got the better of a great finish with Cash Back in the Irish Arkle, a performance that puts him on top of betting for the Cheltenham version.

Last year De Bromhead brought his career total of Cheltenham festival winners to seven with a double through A Plus Tard and Minella Indo.

Both of those are on track to return to the Cotswolds next month in the Ryanair Chase and the RSA respectively, while the strength in depth of De Bromhead’s potential festival team for 2020 hasn’t been missed by bookmakers.

He is a 7-1 shot to disrupt the established order and beat Messrs Mullins, Elliott and Henderson for the leading trainer award next month.

That team also includes the Gold Cup hope Monalee, while Chris’s Dream might also earn a place in the Blue Riband line-up if he impresses in his next start at Gowran.

Chris’s Dream was taken out of Sunday’s Irish Gold Cup due to the going, a call his trainer is happy to have made.

“We just said that unless the word ‘soft’ was there [in the going description] we weren’t going to run him, and it wasn’t. It was a borderline one, but I think we are now for the Red Mills Chase at Gowran in a couple of weeks’ time.”

Aspire Tower lost his position at the top of the Triumph Hurdle betting when crashing out at the final flight of a Grade One on Sunday for which he started a 1-3 favourite.

Despite the horse coming under pressure Rachael Blackmore had got the four-year-old’s head back in front by the last, only for Aspire Tower to take a heavy fall.

“He’s a bit stiff and sore but it’s just bangs and cuts and hopefully in the next few days he’ll be fine,” said De Bromhead, who was reluctant to indulge in any “what if” scenarios had Aspire Tower not exited.

“Rachael felt she still had a bit of horse but she wanted a big jump at the last and unfortunately she didn’t get it. We’re glad he’s home and hopefully we can get him sorted out in a few days and plan accordingly.”