Mullins boosted by Dettori riding True Self in $2.5m race 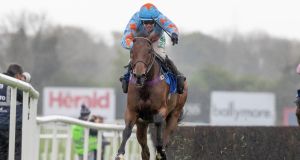 Willie Mullins believes having Frankie Dettori on his side is a “big plus” when True Self lines up for a handicap worth a cool $2.5 million (€2.2 million) in Saudi Arabia on Saturday.

The champion jumps trainer will have a quiet weekend on the domestic front with just four runners ahead of the upcoming Cheltenham festival.

One stalwart Mullins will have to do without at Cheltenham is Un De Sceaux. The 10-time Grade One winner was retired on Friday after picking up a leg injury that ruled him out of the festival.

“It’s a small injury and at this stage of his career he has done us proud,” Mullins said. “He’s been a huge star in our yard. You can’t replace horses like him. It’s impossible. He was a once in a lifetime horse and we were very lucky to have him.”

Uncertainty over the coronavirus and whether or not it could threaten Cheltenham going ahead on Tuesday week has only added to the intensity of the festival build-up.

But as distractions go True Self’s participation in the Longines Turf Handicap in Riyadh on Saturday promises to be a lucrative one.

The near two-mile turf contest is one of half a dozen lucrative races building up to the first running of the world’s richest horse race, the $20 million (€18.1 million) Saudi Cup.

Aidan O’Brien’s globetrotting mare Magic Wand will tackle dirt for the first time in the nine-furlong event run at the King Abdulaziz track and which is due off at 5.40 Irish time.

She will have to tackle some top American stars such as Maximum Security and McKinzie at their own game but O’Brien is encouraged by reports from Dettori that the surface rides closer to grass than any other dirt he’s ridden on.

The Italian star rides the local hope Gronkowski in the big race but his services have been snapped up by Mullins for True Self.

The Irish trainer hasn’t travelled to Riyadh – “with the coronavirus thing breaking everywhere I thought it prudent not to travel” – but has received positive reports about international flat racing’s latest big-money stop.

“It’s good to have Frankie. He knows the place well. I know the grass track has only been laid but he’s ridden there plenty and that’s a big plus.

“It looks a very tough race but it’s a nice prize for a filly who’s well used to travelling. We’ll be delighted if she’s in the first six,” Mullins said.

Joseph O’Brien has both Twilight Payment and Downdraft in the same race due off at 2.10 and will also run Speak In Colours in the earlier $1 million (€910,000) turf sprint.

The hugely lucrative card in Saudi Arabia makes for an unusual focus of Irish racing attention on Saturday after the scheduled domestic fixture at Navan was cancelled on Friday.

The Irish Horseracing Regulatory Board made an afternoon decision to call off the meeting due safety concerns after an adverse weather forecast for severe winds.

Navan had been due to host the featured Grade Three Flyingbolt Chase with a prize fund of €42,500.

Leopardstown’s ground could turn testing if a forecast 10mm of rain falls on the track ahead of Sunday’s fixture.

The Dublin course is also due to race on Monday with the traditional post-race workouts for potential Cheltenham hopes due to take place after that fixture.

Sunday’s feature is the €50,000 TRI Handicap Chase which has a notable topweight in Anibale Fly.

JP McManus’s star has been placed in the last two editions of the Cheltenham Gold Cup but misses out on the festival this time. Instead he is a general 25-1 shot to make it third time lucky in the Aintree National in April.

His presence in Sunday’s race means only he and the Kerry National victor Poker Party carry 11st or more in a race also containing its last two winners, Woods Well and Spider Web.