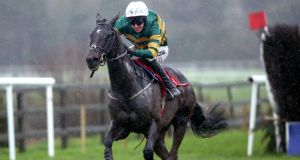 Mark Walsh in action at Punchestown on Tuesday on board Early Doors. The jockey will ride the Gordon Elliott-trained Delta Work in the Cheltenham Gold Cup. Photograph: Bryan Keane/Inpho

Walsh, who won last season’s Champion Hurdle for McManus on Espoir D’allen, has ridden for jump racing’s other ownership behemoth on a number of occasions this season and was successful for Gigginstown on Run Wild Fred at Punchestown on Tuesday.

Maybe that was the deciding factor in O’Leary and trainer Gordon Elliott opting for the jockey to replace the injured Jack Kennedy on Delta Work.

Earlier in the day, Elliott, who believes Delta Work is “made for” the Gold Cup had said “one of three or four lads” could take the mount which was still up for grabs.

However any bookmakers looking to introduce another Cheltenham Festival ante-post market got beaten to the punch.

“It’s a great ride to get and I’m really looking forward to it. He was there last year and third in the RSA. It would be nice to have a Gold Cup on the CV, definitely,” Walsh said.

“He’s beaten everything this year bar Al Boum Photo and they haven’t run against each other. He’s one of the best Irish horses going over,” he added.

McManus doesn’t have a contender for the Gold Cup this season.

Davy Russell partnered Delta Work in five of his starts as a novice last season and also when the Michael O’Leary-owned star landed the 2018 Pertemps Final at Cheltenham.

However, Keith Donoghue took over for Delta Work’s first start this season, after which Kennedy excelled himself in two Grade One victories that have propelled the horse to the forefront of the Gold Cup betting.

The bigger priority is getting Delta Work to the start in a position to emulate Elliott’s previous Gold Cup hero, Don Cossack, who won in 2016.

“I think he is made for the Gold Cup. His style of racing will suit and so will the trip. We’re lucky to have these good horses that people like talking about but he probably gets forgotten about a bit.

“He has won five or six Grade Ones and is a great little horse. He’s not a big, robust horse but he’s a fair one. I love him,” Elliott added.

A year after Don Cossack’s success, Elliott supplanted both Willie Mullins and Nicky Henderson to be crowned top trainer at the festival with half a dozen winners. He did the same thing in 2018 with eight winners.

An overall festival tally of 25 victories has been achieved in under a decade and the intensely ambitious Co Meath trainer is poised to once again barrel his way centre stage when Cheltenham begins on March 10th.

If Delta Work is the standard bearer of a huge team being readied, then it is the unbeaten novice Envoi Allen who an awful lot of people are talking an awful lot about as the most exciting individual prospect of the entire week.

Last season’s bumper champion has won three times over flights this season and will start one of the hottest favourites of the week should he line up in the Ballymore Novice Hurdle.

“If it came up very soft I would not rule dropping back for the Supreme,” Elliott commented. “There would have to be ‘heavy’ in the going description for him to switch.”

Talk of Envoi Allen as a ‘hype’ horse had the 41-year-old master of Cullentra House bridling somewhat.

“I don’t know what all this chat is about him being a hype horse. He’s done it himself by winning three Grade Ones. I don’t talk about any horse; it’s you guys [the media] who talk about them,” he said.

“We don’t hype them up but we think he’s a very good horse. I suppose if you win seven out of seven, people are inclined to talk about you, aren’t they?” Elliott added.

Even in the midst of such a depth of quality, however, there’s still no shaking the Grand National hero Tiger Roll from centre stage whatever the circumstances.

The remarkable little star returned to action at the weekend and is sure to also start a hot favourite to win a third Cross-Country at Cheltenham – and a fifth festival victory in all – before his date with a potentially historic Aintree hat-trick in April.

“If he’s in one piece he will stay in training next season,” Elliott confirmed. “He is 10 years of age and Michael O’Leary isn’t buying any more horses so we need to keep as many of them in as we can.”