Festival due to start in two weeks with 15,000 Irish racegoers expected to attend 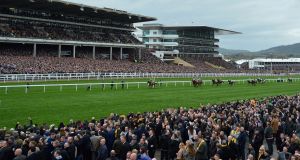 With two weeks to go to the start of the Cheltenham festival, Ireland’s racing authorities have said they’ve had no contact from their counterparts in Britain – or from the government here – in relation to potential measures that might have to be put in place to deal with the coronavirus.

The progress of this season’s Six Nations rugby tournament is already under a cloud due to the spread of the virus in Italy with the HSE advising that Ireland’s match against Italy next week should not go ahead. Health Minister Simon Harris has welcomed the recommendation.

Some sporting events in Italy – including a number of Serie A football matches – have been postponed due to fear of the virus spreading there even more.

With new cases of people testing positive for the coronavirus in other European countries, the containment policy that’s in place, both here and in Britain, is likely to come under even more scrutiny.

Whether that could lead to possible disruption of large sporting events is difficult to predict but for the moment racing officials appear happy to monitor other sports and see how they respond to any potential problems that might arise.

The Cheltenham festival is due to start in two weeks time and up to 15,000 Irish racegoers are expected to attend over the four days of National Hunt racing’s showpiece event.

On Tuesday the British Horseracing Authority was reluctant to comment on the matter.

However, it’s understood that the BHA are taking into consideration how there are about 20 Premier League games, and a number of other Six Nations rugby matches, taking place prior to the festival.

An industry steering group comprised of the racecourses, the horsemen body and the BHA has already been established to consider the implications of the coronavirus for racing in Britain.

Apparently the group has agreed that there is no need to develop a policy regarding abandonment of fixtures at this time and no specific contingency plans are in place for possibly having to restage meetings.

The run-in to last year’s Cheltenham festival was dogged by an outbreak of equine flu a month beforehand. It saw racing cancelled for a week in February and extensive changes to the vaccination of horses had to be implemented in order for them to run.

In 2001 the Cheltenham festival had to be cancelled due to an outbreak of the animal disease foot and mouth in Britain.

Extensive restrictions on movement were encouraged by the Irish government at that time and Six Nations internationals ended up switched to the autumn. Inter-country GAA matches were postponed for over a month. Racing in Ireland was suspended from February 28th to April 15th that year.

Ireland’s racing authorities stressed on Tuesday that they have had no official communication about the coronavirus outbreak.

“We will take our guidance from the department of health and from the government. We’ve had no engagement with them at this point,” said Horse Racing Ireland’s chief executive Brian Kavanagh.

“There was some mention of it a few weeks back, but only speculatively with regard to Cheltenham, and that seemed to have abated.

“In the last three or four days it seems to have ramped up a bit, for example, with the Six Nations rugby with Ireland-Italy on Saturday week. That’s a very relevant barometer to keep an eye on,” he added.

“We’ve heard nothing, either from government or from the UK authorities regarding Cheltenham. So I’m assuming everything is a green light for that.

“We’ve had it before with foot and mouth and things like that but I genuinely don’t understand enough about this thing to comment with any authority on it.

“Clearly you take a steer from the chief medical officer and the department of health and these sorts of bodies. So we’ll wait and see,” Kavanagh said.

A spokesperson for Cheltenham Racecourse said: “It remains full speed ahead for The Festival in a fortnight’s time. Racing continues to liaise closely with government to stay on top of the situation and we are looking forward to four fantastic days of racing at Cheltenham.”