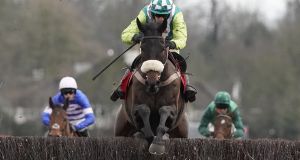 Paul Nicholls is confident Clan Des Obeaux can lay his Cheltenham ghost to rest by providing him with a record-equalling fifth Magners Cheltenham Gold Cup.

The dual King George Chase VI winner will attempt to make it sixth-time lucky at the track by improving on his fifth place in the feature event 12 months ago.

Despite Clan Des Obeaux drawing a blank in his five previous visits to Cheltenham, the champion trainer still rates him one of his best chances of a winner at this year’s Festival.

Nicholls said: “He hasn’t won at Cheltenham yet, but perhaps it will happen in two weeks’ time. Some have said he doesn’t act at Cheltenham, but he hasn’t run too badly there.

“He wasn’t beaten much by Whisper in a novice chase there and he carried top-weight, and he was second in the Caspian Caviar Gold Cup when he was half the horse he is now.

“He ran well in last year’s Gold Cup, he was fifth and jumped the last bang there with them, but didn’t quite finish.

“I think Clan has got a great chance and I’m quietly confident he will give us a good race.”

Clan Des Obeaux stepped up his preparations on Thursday when impressing in a racecourse gallop at Wincanton.

Working with stablemate Frodon, he moved well throughout the two-mile exercise before hitting the line strongly under Harry Cobden.

Nicholls said: “He looks absolutely fantastic in his coat and did a proper workout with Frodon over two miles.

“It was part of their prep to go somewhere this week. I was thrilled with how this lad worked – he went particularly well.”

Nicholls believes not running Clan Des Obeaux in between the King George and the Gold Cup, along with riding him slightly differently, will help bolster his chances of glory.

He said: “Last year we went to the Denman Chase and we went to Cheltenham. This year we have had a different preparation, as we have worked out he is at his best when he has a run, then a nice gap.

“We rode him to the fore last year and this year we will ride him with a bit more restraint, take our time with him and deliver him late.

“The key to him is that he is a year older and has had a different preparation. He is very effective when he is very fit and fresh, which is a combination that is lethal.”

While stablemate Frodon holds an entry in the Gold Cup, the Ditcheat handler confirmed the eight-year-old will attempt to repeat his heroics of last year in the Ryanair Chase.

Nicholls said: “He was last year’s hero. He is in the Gold Cup, but he is almost certain to run in the Ryanair, unless things change enormously.

“He loves Cheltenham, he loves going left-handed and he loves that new course. If it kept on raining, it wouldn’t do him any harm.

“He is in a good place with himself and really ready to defend his crown.”

With Nicholls reporting Frodon to be in good order, he remains confident he can build on his last-time-out success at Kempton by becoming just the second back-to-back winner of the Ryanair.

He added: “He ran in the Old Roan off top-weight, using that as a preparation for the Betfair Chase, and of course all the fences came out and he basically had a gallop round.

“Then he completely under-performed in the Betfair Chase and Clifford [Baker] scoped him and found out he had grade four ulcers.

“He worked very well with Clan Des Obeaux. He loves this time of year and is exactly where he wants to be.”

1 ‘Magnificent’ Conor Connelly remembered after sudden death
2 My favourite sporting moment: When Zidane glided through Brazil in 2006
3 Karen Robinson Walton: I am looking at him. I say ‘Benjamin, what have we done?’
4 Favourite sporting moment? It’s a bit like choosing your favourite child . . .
5 A beautiful, happy accident - Moneyball is the best sports movie ever
Real news has value SUBSCRIBE