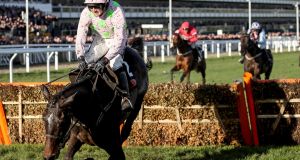 Willie Mullins has given the clearest signal yet that Benie Des Dieux will line up in the Close Brothers Mares Hurdle at Cheltenham.

The champion trainer suggested after Benie Des Dieux’s spectacular return to action at Gowran last month that the Paddy Power Stayers Hurdle, and a clash with the defending champion Paisley Park, could be in the offing.

Benie Des Dieux’s owner Rich Ricci has also mooted the possibility of supplementing her into the Unibet Champion Hurdle for which she is as low as 9-4 in some ante-post betting lists.

Such a range of options backs up Mullins’s description of a “special” talent that could be better than any of the top mares he has trained over the years.

However, he looked to firmly pin his colours to the mares hurdle mast on Monday.

“As far as I’d be concerned Benie is going for the Mares Hurdle. She’s good enough to run in the Stayers. But I think keep it simple,” he said.

“She’s in great order, in great form and at the moment her target is the Mares Hurdle,” Mullins added.

Benie Des Dieux is a general 4-5 favourite for that Grade One contest she won in 2018. Her only defeat in nine starts for Mullins came in the same race a year later when she fell at the last with the race apparently at her mercy.

A third try at the Mares Hurdle on Day One of next month’s festival opens up the possibility of a mouth-watering clash with the unbeaten Honeysuckle. However, the latter has an alternative entry in the Champion Hurdle on the same day.

Mullins has failed to win the mares hurdle at Cheltenham just three times in its dozen year history, principally through Quevega’s unparalleled six in a row between 2009 and 2014.

Another of his current top mares is Laurina who is set to try and regain winning form in the race named after Quevega at Punchestown on Wednesday.

Laurina was pulled up in a Grade One at Sandown at the start of the month. That was another disappointing effort over fences after she was pulled up at Leopardstown on St Stephen’s Day. She was found to burst a blood vessel in that race.

A novice chase campaign that started so promisingly at Gowran looks to have stalled so Laurina will return to the smaller obstacles this week in a race she won in 2019.

“Her home work is fine. This race at Punchestown is coming up and it’s timed well enough for Cheltenham. If she runs well there we’ll have a look at our options,” Mullins said.

In other Cheltenham news on Monday, Gavin Cromwell reported that his high-class four-year-old Wolf Prince, who had been among the market principals for the Boodles Juvenile Hurdle, will miss the festival after a training setback.

Tuesday will see Punchestown have a third go at running the €100,000 Boylesports Grand National Trial after two cancellations due to bad weather.

He is one of seven Gordon Elliott-trained hopefuls and delays don’t prevent Minella Till Dawn from looking like he holds a leading chance in the marathon contest.

The Grade Three Surehaul Novice Hurdle has been transferred from last week’s cancelled Clonmel fixture and its recent roll of honour indicates a race with potential Cheltenham significance.

Allaho beat the subsequent Albert Bartlett winner Minella Indo a year ago and that race could also be a target for the unexposed Lord Royal.

His sole start to date was so impressive as to make him a 14-1 shot for next month’s Albert Bartlett and the presence of horses such as Well Set Up will be a good test of those credentials.

Yanworth is a general 9-1 third-best behind Tiger Roll in betting for the Cheltenham Cross-Country and looks the one to reckon with in Tuesday’s opener.